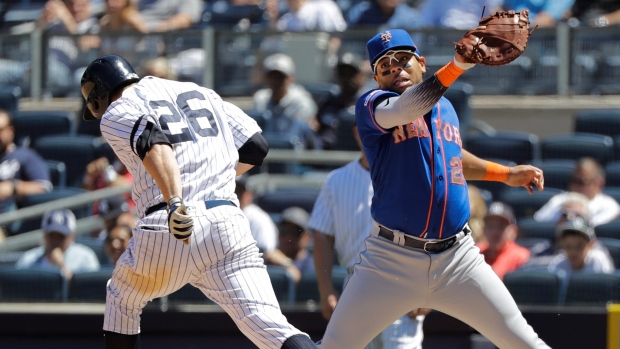 NEW YORK — The New York Mets will host the crosstown Yankees on the 20th anniversary of 9/11 next season, according to a person familiar with the decision.

The clubs will play at Citi Field in a game sure to be full of emotions for the city that's also reported over 18,000 confirmed coronavirus deaths this year. The person spoke to The Associated Press on condition of anonymity because Major League Baseball has not yet released next season’s schedule.

“I can’t imagine how powerful and how emotional of an event that could be," Yankees manager Aaron Boone said.

The decision was first reported by Newsday.

The 20th anniversary game will be played not far from the site of demolished Shea Stadium, where Hall of Famer Mike Piazza hit a memorable home run for the Mets against the Braves on Sept. 21, 2001 in the first major sporting event in the city following the attacks. New York wore hats honouring the city's first responders for the game.

Mets slugger Pete Alonso is sure to have a hand in the planning.

The 25-year-old reigning NL Rookie of the Year sidestepped MLB rules to create customized cleats for all of his teammates honouring9-11 victims and first responders for New York's home game last Sept. 11. Alonso later donated his spikes to the National September 11 Memorial & Museum

The Yankees and Mets won't have to wait that long to see each other. The teams announced Tuesday they will play preseason exhibition games July 18 at Citi Field and July 19 at Yankee Stadium as they prepare for the start of a pandemic-shortened 60-game regular season.

The Yankees will start the season against the World Series champion Nationals in Washington on July 23 — the first game of the year for any team. The Dodgers and Giants will play later that night, and the rest of the league will open the next day.

The Philadelphia Phillies will travel to the Bronx for an exhibition game July 20. It'll be a homecoming of sorts for former Yankees manager Joe Girardi, who was hired as Phillies manager over the off-season.