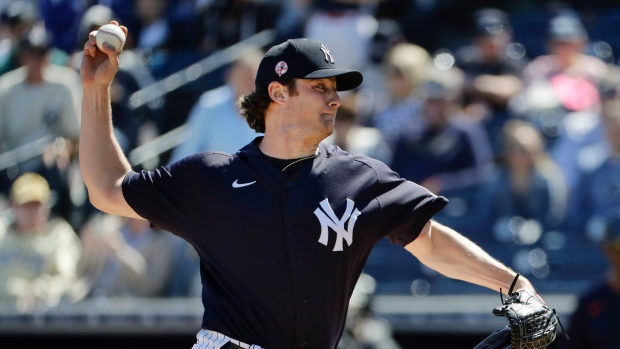 NEW YORK — Lawyers for the baseball players’ union asked Major League Baseball to submit a slew of financial documents that detail the industry’s finances, a person familiar with the request told The Associated Press.

The person spoke on condition of anonymity Thursday because neither side announced the step.

Baseball owners on Monday approved a proposal that could lead to the coronavirus-delayed season starting around the Fourth of July with a regular-season schedule of 82 games per team, including 13 against each division rival. Owners also gave the go-ahead to propose basing players’ salaries on a a 50-50 revenue split, which the union says is a salary cap and a framework players will never agree to.

“It’s hopeful that we will have some Major League Baseball this summer. We are making plans about playing in empty stadiums,” Commissioner Rob Manfred said on CNN on Thursday, adding he is confident of reaching a deal with players.

The type of financial disclosure the union asked for is more common during overall collective bargaining talks, which play out for many months or years, rather than the limited negotiation time available now.

"There’s so many ways to hide the money,” Cincinnati pitcher Trevor Bauer said in a video he posted Wednesday on Twitter.

Bauer said owners could reduce ticket prices and at the same time charge more for parking garages they control through different entities that do not benefit the club.

Describing himself as being only slightly lighthearted, the outspoken 29-year-old took a shot at the commissioner.

“If I’m going to have to trust my salary to Rob Manfred marketing the game to make more money for the game, I am out on that,” Bauer said. “Let me market the game and we’ll all make more money.”

Teams made a presentation to the union Tuesday that included a dire financial forecast but no formal proposal.

Management fears even more financial difficulty if regular-season games are played, causing players to be paid their salaries, and the post-season is cancelled because of a second wave of the new coronavirus. Players do not draw salaries during the post-season, when MLB receives the largest portion of its national broadcasting revenue.

Players are waiting to received detailed medical and testing protocols from MLB. Not willing to risk becoming ill, Tampa Bay Rays All-Star pitcher Blake Snell said he would not take the mound this year if his pay is cut further.

“I’m not splitting no revenue. I want all mine,” the 2018 AL Cy Young Award winner said on a Twitch stream Wednesday. “Bro, y’all got to understand, too, because y’all going to be like: ‘Bro, play for the love of the game. Man, what’s wrong with you, bro? Money should not be a thing.’ Bro, I’m risking my life. What do you mean, ‘It should not be a thing?’ It 100% should be a thing.”

The Sports Medicine Research and Testing Laboratory in Salt Lake City, which conducts testing for players with minor league contracts and participated in the recent coronavirus antibody study, would handle MLB's testing for the virus and promised a 24-hour turnaround.

“All of our players would be tested multiple times a week, PCR testing to determine whether or not they had the virus,” Manfred told CNN. “That testing would be supplemented less frequently by antibody testing,”

A 27-year-old left-hander, Snell agreed in March 2019 to a $50 million, five-year contract that included a $3 million signing bonus, a $1 million salary last year and a $7 million salary this season.

As part of the March 26 agreement between Major League Baseball and the players’ association, Snell is being advanced $286,500 for the first 60 days of the season through May 24 but would not get any more in 2020 if no games are played. The deal calls for players to receive prorated shares of salary if the season does start; Snell would get $43,210 for each day of the schedule.

Teams say they would lose money if games are played in empty ballparks. Manfred says 40% of revenue is gate and related to gate and told CNN if there is no season losses would approach $4 billion.

“If I’m going to play, I should be at the money I signed to be getting paid,” Snell said. “I should not be getting half of what I’m getting paid because the season’s cut in half, all on top of a 33% cut of the half that’s already there, so I’m really getting like 25%. On top of that, it’s getting taxed. ... If I get the ’rona, guess what happens with that? Oh, yeah, that stays -- that’s in my body forever.”

MLB's staff has spent two months working on the testing plan. Manfred said there would be daily temperature checks and symptom analysis. If someone tests positive, they would be quarantined until they have two negative tests over 24 hours.

“We hope that we will be able to convince the vast, vast majority of our players that it’s safe to return to work,” Manfred told CNN. “The protocols for returning to play, the health-related protocols are about 80 pages in length. They’re extraordinarily detailed. They cover everything from how the players will travel, private charters, how those charters have to be cleaned, who has access to the ballpark, strict limits on number of people, tiering of employees, so even those people who are in the ballpark will be isolated in general from the players.

“So we'll hope that we’ll be able to convince them that it’s safe.,” he added. “At the end of the day, however, if there’s players with either health conditions or just their own personal doubts, we would never force them or try to force them to come back to work. They can wait until they feel they’re ready to come.”

Teams would play six games against each rival in the same region's division in the other league, creating six games each between rivals such as the Yankees and Mets, Cubs and White Sox, Dodgers and Angels, and Giants and Athletics.

MLB's preference is for teams to use their regular-season ballparks. Manfred said he has spoken with the 18 governors whose states host MLB teams.

“Assuming that we try to play some games starting in the first half of July, most governors expressed hope that we would be able to use facilities, of course, initially without fans," he told CNN. "But we do have contingency plans if, in fact, there was a problem in a particular market, we have contingency plans where that team could play somewhere else, at least temporarily.”