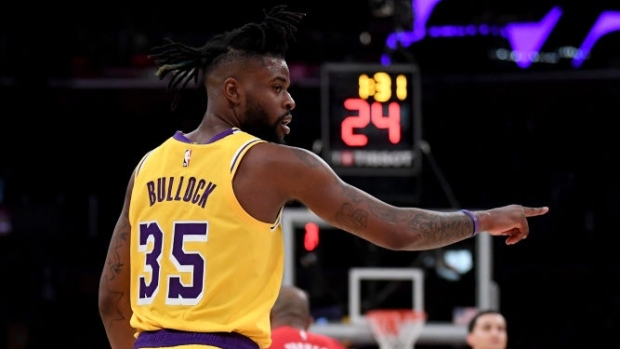 Bullock and the Knicks originally agreed to a two-year, $21 million deal not long after the start of free agency but the two sides were forced to re-work things over the last week because of an unexpected health issue, Charania adds.

According to Ian Begley of SNY, Bullock is expected to miss at least one month of the regular season. Begley notes it's unclear what the issue is but he has dealt with plantar fasciitis in the past.

Begley also adds that Bullock's deal is expected to be less than the $4.7 million exception.

Reggie Bullock, who agreed to a re-worked two-year deal with the Knicks, is expected to miss at least one month of the regular season, per sources: https://t.co/PuVt9JbmEf

The Knicks, who were close to reaching the salary cap after a flurry of free agent signings, used the extra money they had last week with the Bullock deal falling through to sign forward Marcus Morris, who agreed to a one-year, $15 million deal with New York. Morris had originally planned to sign with the San Antonio Spurs on a two-year, $20 million deal but reneged once the Knicks became an option according to multiple reports. Now, the Knicks end up with both players.

Bullock, 28, spent the last several seasons with the Detroit Pistons but was dealt to the Los Angeles Lakers mid-season. In 63 games combined between the two teams, Bullock averaged 11.3 points per game on 41.2 per cent shooting from the field and 37.7 per cent from beyond the arc.

He is a career 39.2 per cent shooter from three-point land.

Bullock is one of several free agent signings the Knicks have made this summer, including Morris, Julius Randle, Bobby Portis, Taj Gibson, Elfird Payton and Wayne Ellington.