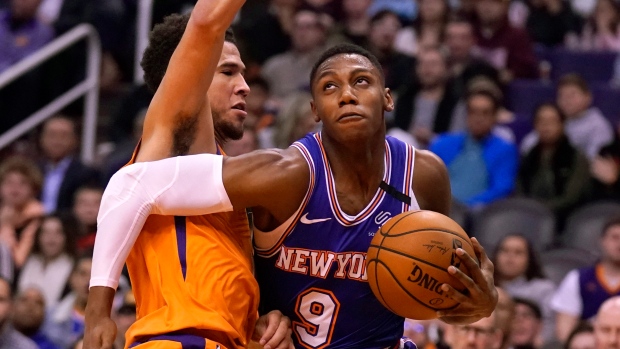 New York Knicks Canadian rookie RJ Barrett is making progress after spraining his right ankle last week and will be re-evaluated in one week, according to ESPN's Marc J. Spears.

Spears reports Barrett now has a walking boot after using crutches the past week.

Knicks say RJ Barrett continues to make progress from a sprained right ankle. New York says he transitioned from crutches to a walking boot and will be re-evaluated in one week.

The 19-year-old Toronto native suffered the injury in the third quarter of New York's 121-98 loss to the Phoenix Suns on Jan. 16. Barrett's postgame X-rays were negative.

The teenager injured his ankle after he landed awkwardly on a drive to the basket where he was fouled by Suns guard Ricky Rubio. Despite appearing to be in tremendous pain, Barrett gathered himself and was able to shoot his subsequent free throws. He left the game soon after and did not return.

Barrett, who was drafted third overall by the Knicks in last year's NBA draft, has averaged 14.1 points and 5.2 rebounds over 40 games this season.