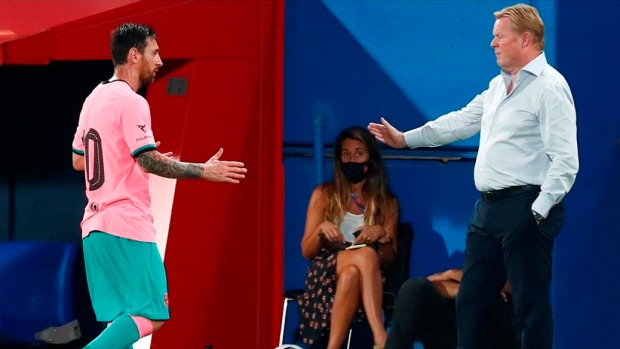 Ronald Koeman's stint at Camp Nou isn't over just yet.

Fabrizio Romano reports that Barcelona president Joan Laporta has decided to continue on with the Dutchman as manager next season.

Ronald Koeman STAYS at Barcelona, confirmed. Koeman agents were ‘confident’ since one week and now the agreement is imminent. Joan Laporta decided to continue with Koeman as manager next season. Here we go. 🔵🔴🇳🇱 #FCB #Barcelona #Koeman

There had been some thought that the club would pivot away from Koeman after Laporta's election to a new term as president this past March.

Koeman, who spent six seasons with Barca as a player, led the club to a third-place finish in La Liga in his first season in charge, but did capture the Copa del Rey.

The Barcelona job is Koeman's second stint in Spain, having previously managed Valencia for one season in 2007 to 2008.

Among the other clubs managed by the 58-year-old Koeman are Ajax, Benfica, PSV, Southampton, Everton and the Dutch national team.

Barca has already made a flurry of signings, thus far, in the offseason, bringing in forward Sergio Aguero and defender Eric Garcia in from Manchester City on free transfers and recalling Brazil defender Emerson Royal from his loan spell at Real Betis.