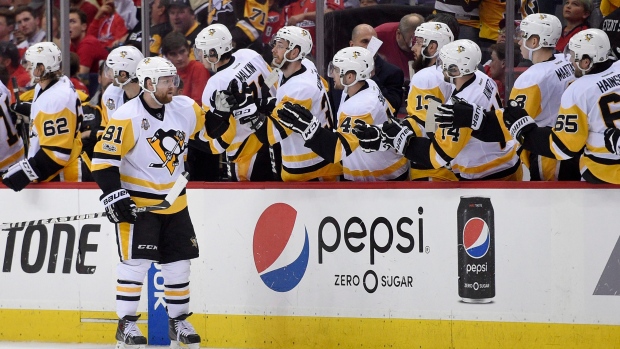 Pittsburgh Penguins general manager Jim Rutherford told The Athletic's Pierre LeBrun on Friday that the recent reports of dissention between Phil Kessel and head coach Mike Sullivan have been exaggerated.

“This is something that I believe has been blown out of proportion."

“This is something that I believe has been blown out of proportion,” Rutherford told The Athletic. “I don’t know where this story started. It’s unfortunate."

Kessel's reported rift with Sullivan is over being taken off Evgeni Malkin's line during the year.

"I don’t think it’s been any secret here for three years that Phil’s preference is to play with Gino," Rutherford explained. "But, when (Sullivan) looks at our team, he believes balance throughout the lineup is the best way to win, and we won two Cups that way with Phil not playing with Gino. So there’s times where they play together, when they’re both really going, and there’s times when they don’t."

Rutherford also believes it's an issue that can be resolved and Kessel can remain with the Penguins moving forward.

“I don’t feel that we have to trade Phil Kessel,” said Rutherford. “He was a difference-maker when we won the two Cups, he’s coming off a year where he had 92 points and we didn’t win the Cup. We didn’t three-peat, and now people are trying to come up with ideas why we didn’t do that."

TSN Hockey Insider Bob McKenzie said on Saturday he believes the Penguins could at least listen to offers for the 30-year-old right winger.

"They'll listen on Kessel, if they get the right deal he could be dealt, but it's not absolutely a forgone conclusion that Kessel won't be back in Pittsburgh next year," McKenzie said. "Lots of teams interested in him, Los Angeles Kings amongst others."

Kessel set career-highs in points and assists in the regular season last year - finishing with 34 goals and 58 assists in 82 games - but struggled in the playoffs, recording just one goal and eight assists in 12 games before the Penguins were eliminated by the Washington Capitals in the second-round of the playoffs.