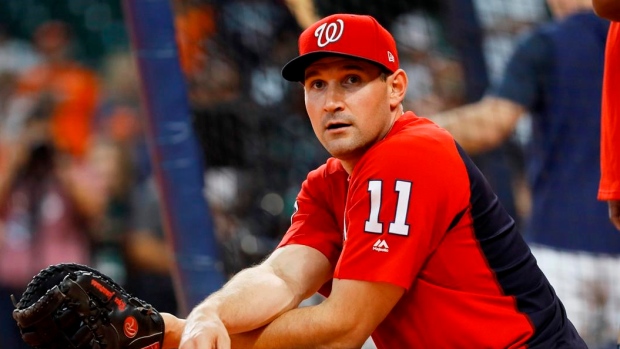 WASHINGTON — First baseman Ryan Zimmerman is returning to the Washington Nationals after sitting out the pandemic-shortened 2020 season, agreeing in principle to a $1 million, one-year contract, a person familiar with the negotiations told The Associated Press on Friday.

The contract would include additional bonus provisions.

A second person confirmed to the AP there is an agreement in principle in place, without describing the terms. Both people spoke on condition of anonymity because the agreement was subject to a successful physical.

The 36-year-old Zimmerman has played 15 seasons in the majors, all for the Nationals, who selected him with their first pick in the 2005 amateur draft shortly after the club moved to Washington from Montreal.

He helped the franchise win its first World Series title in 2019, but did not play last year, opting out of the season because of concerns about his family’s health amid the coronavirus pandemic.

Zimmerman's mother has multiple sclerosis; he and his wife had their third child last year.

“At the end of the day, does a player feel comfortable going to the field every day and — in my case, more importantly — feel comfortable coming home every day and feel like they’re not putting anyone else in danger?” Zimmerman asked in a June entry of the diary of sorts he occasionally wrote for the AP in 2020.

The two-time NL All-Star, a right-handed batter, figures to get limited playing time following the acquisition of switch-hitting first baseman Josh Bell from the Pittsburgh Pirates in a trade last month.

Zimmerman hit .257 with six homers and 27 RBIs in 171 at-bats in 2019, and homered to start the Nationals’ comeback from a 2-0 deficit in the World Series opener against the Houston Astros. Washington won the championship in seven games.

When he discussed landing Bell with reporters last month, Nationals general manager Mike Rizzo said: “The acquisition of Josh Bell isn’t going to prohibit us from looking for a good right-handed hitter that comes off the bench or plays multiple positions."

Rizzo added: “We still haven’t ruled out a ‘Zim’ reunion. That skill set still fits on our roster.”

While Zimmerman gave up a $2 million salary because he skipped last season, he did receive a $2 million buyout for the declined option at the end of his previous deal, which covered 2014-19.