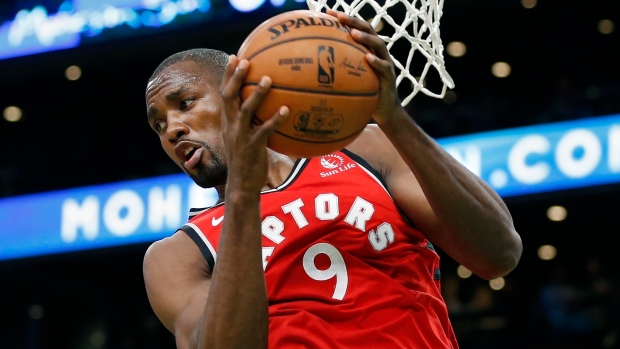 After the Toronto Raptors started the day off with good news, it's ending on a sour note.

According to The Athletic's Shams Charania, Serge Ibaka has agreed to a deal with the Los Angeles Clippers, ending a four-year run as a member of the Raps and reuniting with former teammate Kawhi Leonard in L.A.

ESPN's Adrian Wojnarowski reports the deal is for two years and $19 million and includes a player option for the second year.

The news come about 12 hours after multiple reports indicated Fred VanVleet was returning to the organization on a four-year, $85 million deal.

At this hour, Toronto is still working to convince free agent Marc Gasol to return on a new deal, sources tell ESPN. https://t.co/p8kHA9js0k

However, Ibaka's departure may open the door for another familiar face to return.

"At this hour, Toronto is still working to convince free agent Marc Gasol to return on a new deal," Wojnarowski tweets.

Ibaka was acquired from the Orlando Magic near the trade deadline in 2017 as part of a deal involving forward Terrence Ross and a first-round draft pick.

The 31-year-old fit nicely once he joined the Raps, providing floor spacing and a defensive presence in the paint alongside Gasol. Ibaka also played a pivotal role down the stretch of Game 7 of the 2019 Eastern Conference semis, which the Raps defeated the Philadelphia 76ers in en route to their first NBA Championship in franchise history.

In 228 games as a Raptor, Ibaka averaged 14.2 points per game to go along with 7.4 rebounds and 1.2 blocks. Prior to his time north of the border, Ibaka spent seven seasons with the Oklahoma City Thunder and one season with the Magic.