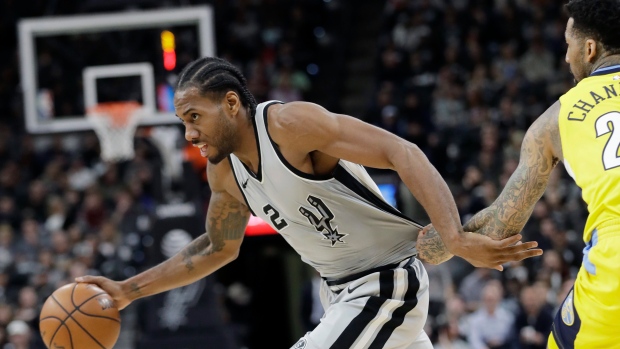 San Antonio Spurs forward Kawhi Leonard wants a trade to Los Angeles, preferably the Lakers over the Clippers, according to ESPN’s Adrian Wojnarowski and Ramona Shelburne.

Leonard reportedly does not want to play in San Antonio any longer and will eventually alert teams considering trades for him that his intentions are to sign in Los Angeles – his birthplace – when he becomes a free agent in 2019.

Wojnarowski and Shelburne report that the Spurs are unlikely to be motivated to facilitate a deal to the Lakers.

Gregg Popovich traveled to Southern California Tuesday to meet with Leonard, something the Spurs’ coach has been working to set up for weeks according to the report.

Leonard is eligible to sign a five-year, $219 million super max contract with the Spurs this summer.

ESPN reports that Leonard is angry over what he believes was a mishandling of a quadriceps injury, as well as comments made by Popovich and teammate Tony Parker regarding his injury as Leonard sat out. Leonard played in only nine games this season, scoring 16.2 points a night, well below his average of 25.5 in 2016-17.

The Spurs have reportedly tried to work through the issues with the 26-year-old and have been communicating that in trade talks with other clubs.

The Spurs finished last season at 47-35, their lowest regular-season win total since 1999.