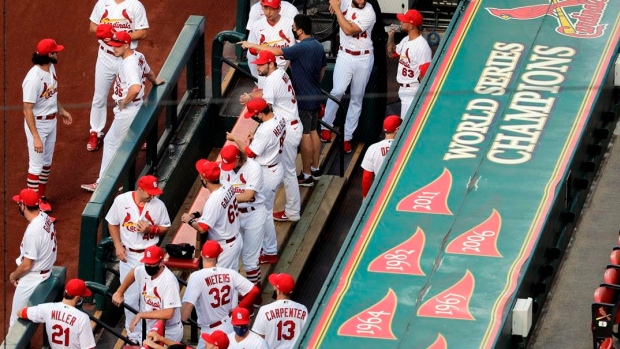 Another speed bump has been presented to the St. Louis Cardinals season.

According to Mark Saxon of The Athletic, Cardinals players are being informed that the team will not be assembling for at least three to five days.

#STLCards players are being informed today that the team will not be assembling for at least 3-5 days and to get in workouts on their own, per source. Pittsburgh series likely will be canceled.

Saxon adds that the players are being told to get in workouts on their own and St. Louis' upcoming series with Pittsburgh will likely be cancelled.

The report comes just a few days after the Cardinals series against the Chicago Cubs was postponed.

In order to complete the 60-game schedule in this shortened season, the Cardinals will have to play 55 games in 46 days once they return to the field.

The Cardinals have been off since last Friday, when two players returned positive coronavirus tests. Eight St. Louis players in total have tested positive, including star catcher Yadier Molina.

The Cardinals spent five days in quarantine in a Milwaukee hotel before finally being cleared to travel back to St. Louis late Tuesday, when they returned negative tests for the second straight day. They got workouts in at home and had been prepared to return to the field Friday.