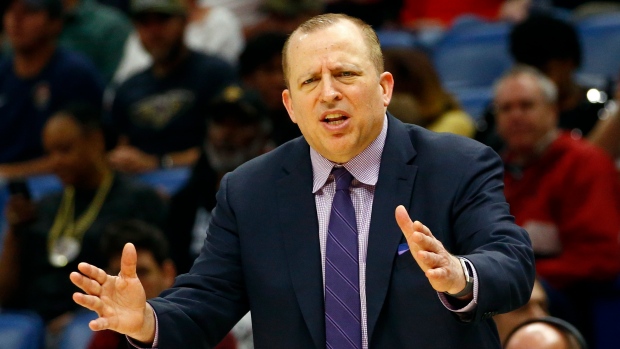 The leading candidate for the New York Knicks' coaching vacancy had his formal meeting.

Tom Thibodeau — the leading candidate for the New York Knicks coaching job — had his formal interview with the organization today, sources tell ESPN.

The 62-year-old Thibodeau has been out of the NBA since his two-and-a-half year stint with the Minnesota Timberwolves came to an end in January of 2019.

A native of New Britain, CT, Thibodeau has a career mark of 352-246 over eight seasons with the Chicago Bulls and T-Wolves.

Thibodeau was the NBA's Coach of the Year in 2011, his first season with the Bulls in which he led them to 62 wins and trip to the Eastern Conference Finals.

Among other candidates for the vacancy include Los Angeles Lakers assistant and former Knicks player Jason Kidd.