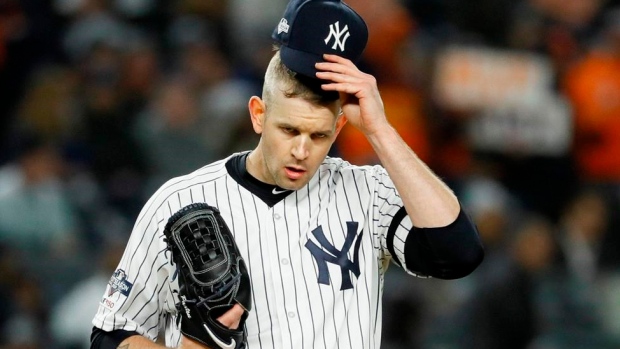 It looks as though the Toronto Blue Jays are remaining busy when it comes to the free agent market as they are reportedly eyeing Canadian starting pitcher James Paxton, according to Jon Heyman of MLB Network.

Heyman also reports that the Jays have been in touch with free agent shortstop Andrelton Simmons.

Jays, already having a big week/winter, have been in touch with SS extraordinaire Andrelton Simmons

Paxton, a Ladner, B.C., native, was acquired by the New York Yankees in a November 2018 trade with the Seattle Mariners but struggled with injury throughout his time in the Bronx. In fact, Paxton made just 34 starts for New York over two seasons and pitched to an iffy 4.16 ERA, well above the 3.42 mark he put up in six seasons as a member of the Seattle Mariners.

On May 8, 2018, Paxton threw a no-hitter in Toronto against the Blue Jays to become the first Canadian to ever toss a no-no on home soil and the first Mariner to record one on the road. He also became just the second Canadian to throw a no-hitter in MLB history, joining Dick Fowler of the Philadelphia Athletics in September of 1945.

Paxton made his Major League debut back in September of 2013.

Simmons, 31, hit .297 with 10 RBIs over 30 games with the Los Angeles Angles last season. The four-time Gold Glove winner has spent nine years in the Majors with the Angels and Atlanta Braves.