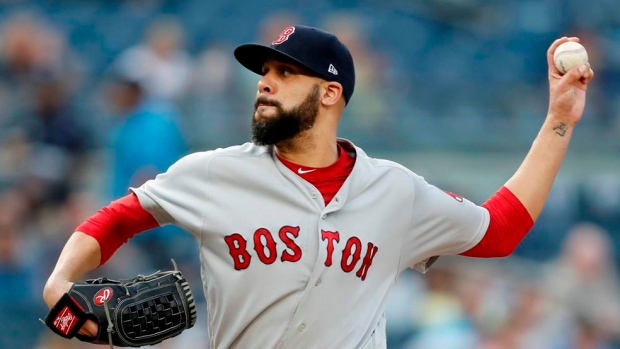 The Toronto Blue Jays have talked to the Boston Red Sox about a trade for David Price, according to The Athletic's Ken Rosenthal.

Rosenthal notes that Toronto is exploring all avenues to upgrade its starting pitching. The reached a four-year deal with left-hander Hyun-Jin Ryu after Rosenthal's report was published and it's unclear if they're still in the market for Price with Ryu now in the fold.

Rosenthal wrote that a deal would only happen if the teams could agree on how much money the Red Sox will pay of Price's remaining $96 million in the final three years of his contract.

Very curious to see how aggressive #BlueJays get from here on out this winter.
There’s legit legs to the David Price stuff, that was swirling back in November, but Red Sox will have to pay somewhere in the neighbourhood of $50 million.
Atkins might be interested at 3/$46M-ish.

TSN's Scott Mitchell noted on Monday that there was legs to the Price rumours which began swirling in November, but the Red Sox will likely have to pay somewhere in the neighbourhood of $50 million. He adds that Jays general manager Ross Atkins might be interested in three years/$46 million.

Price, 34, was acquired by Toronto at the 2015 trade deadline as former general manager Alex Anthopoulos made one last push to bolster the team before their first playoff run in 22 years.

Toronto traded three players - Matthew Boyd, Jairo Labourt and Daniel Norris - for Price who was set to become a free agent at the end of that 2015 season.

Price went 9-1 with the Jays in the regular season, but he and the team fell short in the playoffs, getting knocked out in the ALCS by the Kansas City Royals in six games.

Price signed a lucrative seven-year, $217 million contract with the Red Sox that off-season and won a World Series with them in 2018.

The lefty is coming off an injury riddled season which saw him make just two starts after July 30, due to a wrist injury.