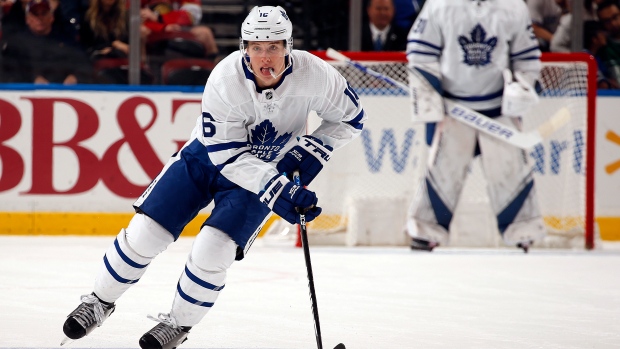 It appears the Toronto Maple Leafs are offering a variety of terms as the team looks to reach a contract extension with restricted free agent Mitch Marner.

James Mirtle of The Athletic wrote on Friday that the Maple Leafs have offered Marner between just under $9 million to roughly $11 million per season on his new deal based on term. Mirtle writes that the Leafs have discussed three, six and seven-year deals with Marner’s camp, who are thought to be uninterested in the max eight-year term.

Mirtle adds that the "general consensus" is that Marner's camp initially asked for Auston Matthews' contract - a five-year deal at a $11.6 million cap hit - before countering an eight-year offer from the Leafs with a three-year, $30 million bridge contract.

Marner is one of several high-profile restricted free agents who remain without a contract, including Brayden Point of the Tampa Bay Lightning, Colorado Avalanche winger Mikko Rantanen, Matthew Tkachuk of the Calgary Flames, Winnipeg Jets forwards Patrik Laine and Kyle Connor and Brock Boeser of the Vancouver Canucks.

Leafs general manager Kyle Dubas noted Saturday that the Maple Leafs are not alone in having their star RFA unsigned and added there's little to suggest that list will get shorter in the near future.

"It's just really the status quo at this point," Dubas told TSN. "And I think the reality is, it's the status quo with all these types of players throughout the league. There doesn't seem to be anything really transpiring, and as it gets into August, it's kind of into a bit of a slog where there doesn't seem to be any real progress, you don't even hear of any progress in any of the other situations."

Marner led all remaining unsigned RFAs in points last season with 94, followed closely by Point, who had 92 points and scored 41 goals to Marner's 26 in three fewer games.

The Maple Leafs will open training camp in St. John's, N.L., on Sept. 13 and Dubas said Saturday he's optimistic Marner will be with the team at that point.

"Hopefully as the calendar begins to turn, we can begin to get it towards a spot where he's ready to go for training camp," he said. "I mean, we were sure hopeful to have it done in the spring, unfortunately we weren't able to do that, and so we'll just keep working at it, working with (agent) Darren Ferris and working with Mitch.

"I'm confident. I'm optimistic, so I'll stay that way until the end."