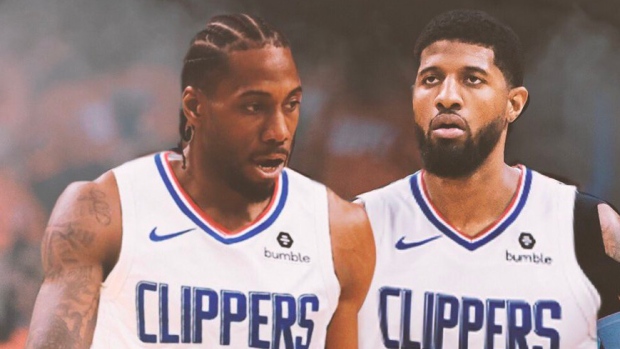 Free agent Kawhi Leonard intends to sign a four-year, $142 million contract with the Los Angeles Clippers and team up with the recently acquired Paul George, according to ESPN's Adrian Wojnarowski, but the insider also says that the Toronto Raptors had discussions with the Thunder about a trade for George.

According to Wojnarowski, Oklahoma City Thunder general manager Sam Presti attempted to secure the best deal available to the Thunder from both the Clippers and Raptors after George's agent, Aaron Mintz, approached him in recent days with a trade request. In his previous negotiations with the Clippers, per Wojnarowski, Leonard essentially told the team that if they were able to secure George, then they would secure his services as well.

"In a wild night of negotiations, Presti leveraged the Clippers and Raptors off each other, preying on the uncertainties of what the other might be willing to give OKC for the chance to secure Leonard and George -- and perhaps the inside track on a championship," Wojnarowski wrote in an article published early on Saturday morning.

George was believed to be willing to play for the Raptors, per Wojnarowski, and Toronto had a real shot at acquiring him from the Thunder. So much so, in fact, that the insider says that at one point, Clippers owner Steve Ballmer, team president Lawrence Frank and team general manager Michael Winger "harbored fears" that Presti was close to striking a deal with Toronto.

What would a potential deal with the Raptors and Thunder for George have looked like?

"Had Presti been able to strike a deal for George with the Raptors -- and Leonard was willing to stay -- George was believed to be willing to join the Raptors too, sources said. Presti had been willing to pursue a package of Russell Westbrook and George to the Raptors, but no talks ever gained traction, sources said. Ujiri and Raptors GM Bobby Webster had no ability, nor inclination to counter the Clippers offer with a multitude of first-round picks into the middle of the next decade, league sources said.

"The Raptors could have been looking at adding Westbrook, with four years and $171 million left on his deal, and George to a team that Leonard still might have parted ways with. Toronto extended itself as far as it could for Leonard, but Ujiri could never be sure that the Thunder even wanted to do a deal with them -- and perhaps were just using the Raptors to squeeze more out of the Clippers," Wojnarowski wrote.

In the end, Toronto didn't have assets to satisfy OKC --- with or without Siakam in any proposed deal. The fear of Toronto entering into trade talks with OKC only proved to guarantee the Clippers would go the distance with five first-round picks and SGA in deal for George.

According to the Toronto Star's Bruce Arthur, the Thunder asked for Pascal Siakam, Fred VanVleet and four unprotected first-round picks to start.

OKC asked for Siakam, VanVleet, and four unprotected firsts to start, and it felt like the Raptors were leverage. After some indecisiveness, Kawhi and his camp seemed to gravitate to LA. It was a great year, and a tough finish. On the end of the affair: https://t.co/9xpCANaEOR

Ultimately, the Thunder traded George to the Clippers for Canadian point guard Shai Gilgeous-Alexander and forward Danilo Gallinari, along with 2022, 2024 and 2026 draft picks, their unprotected 2021 and protected 2023 first-round picks via Miami Heat, and the rights to swap picks with the Clippers in 2023 and 2025, according to Wojnarowski.