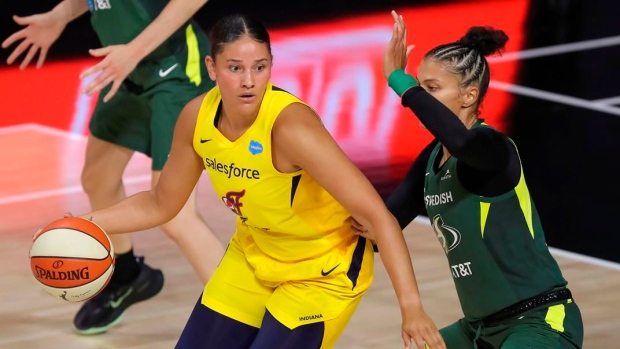 Natalie Achonwa is signing a multiyear contract with the Minnesota Lynx, a person familiar with the deal told The Associated Press.

The person spoke to the AP on Thursday on condition of anonymity because no official announcement is allowed until Feb. 1.

Achonwa has played her entire WNBA career in Indiana after getting drafted ninth by the Fever in 2014. She missed that season while recovering from an injury. She’s averaged 7.7 points and 4.5 rebounds in her career.

This move comes a day after the AP confirmed that the Lynx added Kayla McBride to the roster. That deal also can’t go through until Monday.

They’ll be joining a strong core in Minnesota that includes the past two WNBA Rookies of the Year in Crystal Dangerfield and Napheesa Collier, as well as the league’s career leading rebounder, Sylvia Fowles.

The Lynx have won four WNBA championships in the last 10 seasons. They lost in the semifinals of the playoffs last year to Seattle.