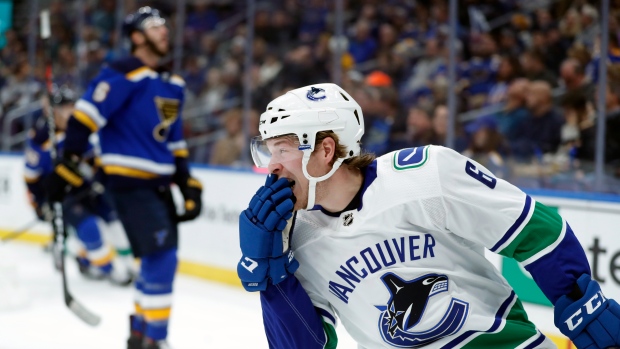 According to Ben Kuzma of the Vancouver Province, Brock Boeser's agent Ben Hankinson "has an appetite for a four-year extension at $7 million annually" for his client this summer.

A four-year, $28 million contract for Boeser would top that of San Jose Sharks forward Timo Meier, who signed a four-year, $24 million deal in July and was noted to be a comparable to Boeser by Canucks general manager Jim Benning on Monday.

“Those are some of the names we’ve used,” Benning said of Meier and currently unsigned Winnipeg Jets restricted free agent Kyle Connor. “They (Boeser’s camp) have been reasonable and we’re continuing to talk to get to some common ground. I’m hopeful to get something done before camp, but we’re not there yet.”

Boeser had 26 goals and 56 points in 69 games last season, but as Kuzma notes, on pro-rated basis to 82 games, the 22-year-old would have had 66 points, equal to both Meier and Connor.

Benning noted, however, that Boeser is unlikely to sign a deal with the same structure as Meier, whose back-loaded deal will see him earn $10 million in the final year, setting him up for a qualifying offer above that when he hits restricted free agency again in 2023-24.

“That scares me a bit,” Benning said of the structure of Meier's deal.

Per CapFriendly, the Canucks have just $5.06 million in cap space with Boeser and Nikolay Goldobin still in need of new deals. Benning said Monday he's not concerned about the cap crunch and noted he has the permission of ownership to demote veterans.

“Guys who deserve to be here will be here and we’ll probably have to make some tough decisions,” Benning said when asked if the club would be willing to demote veterans.

“That could happen but we have options and LTIR and different options. A lot depends on camp.”