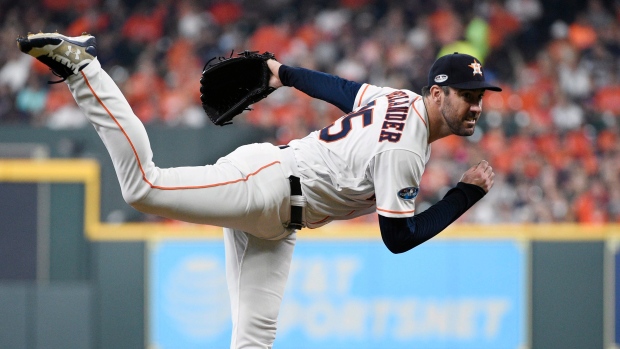 Justin Verlander and the Houston Astros have agreed to a contract adding an additional $66 million in guaranteed money for 2020 and '21, a person with direct knowledge of the situation told The Associated Press.

The person spoke Saturday on the condition of anonymity because the deal had not been announced. The agreement was first reported by KRIV-FOX 26.

A 36-year-old right-hander, Verlander is due $28 million in 2019, the final guaranteed season of a $180 million, seven-year deal he signed with Detroit before the 2013 season. That contract included a $22 million for 2020 that would have become guaranteed if Verlander finished among the top five in Cy Young Award voting this year.

Verlander was traded from Detroit to Houston on Aug. 31, 2017, and helped the Astros win their first World Series that season. The 2011 AL MVP and Cy Young Award winner, he finished second in Cy Young voting last season after going 16-9 with a 2.52 ERA in 34 starts. He pitched 214 innings and led the AL with 290 strikeouts.

The seven-time All-Star, entering his 15th season, spent his entire big league career with the Tigers before the 2017 trade. In his MVP season, Verlander won a career-high 24 games and had a career-low 2.40 ERA, which led the AL. He pitched 251 innings and struck out 250 batters that season, which were both the most in the AL.

Verlander takes great pride in his durability and has pitched more than 200 innings in 11 seasons, leading the AL in three of those years.

Verlander was great for the Astros after the trade in 2017, going 5-0 with a 1.06 ERA in five starts in the regular season and winning four games in the post-season. He went 2-0 with a 0.56 ERA against the Yankees in the AL Championship Series that season and was selected MVP of that series.