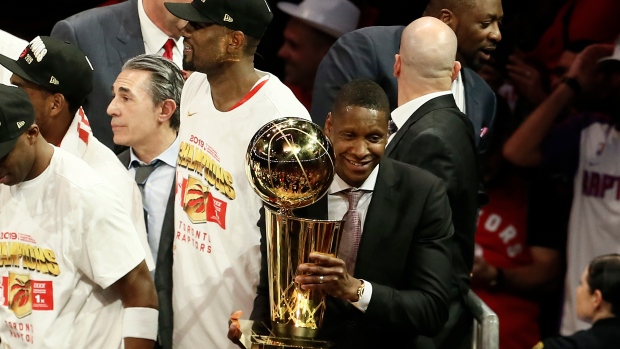 Apparently the Washington Wizards are not actually interested in poaching Masai Ujiri from the newly crowned NBA champion Toronto Raptors after all.

“We have not commented on the many rumors surrounding potential candidates during this process, but I wanted to make an exception in this case out of respect to the Raptors organization as they celebrate their well-deserved championship,” Leonsis said. “Any reports that we have interest in Masai Ujiri as a candidate are simply not true, and we have never planned in any way to ask for permission to speak to him during our process.”

Buckner also reported on June 14 that the Wizards were unlikely to present Ujiri with an offer, following a bevy of reports to the contrary.

It was specifically reported that Leonsis was planning to offer Ujiri a package that included an annual salary of nearly $10 million as well as an ownership stake in Monumental Sports and Entertainment, the parent company that operates the Wizards, the NHL's Capitals (NHL) in addition to other professional sports teams and businesses.

The 48-year-old Ujiri, who took over control of the Raptors in 2013, has two years remaining on his contract. Away from the championship he architected this past season, Ujiri's raptors squads have reached the postseason in each of his six seasons with the club, and have put up 58 and 59 regular-season wins, respectively, the past two years.

Prior to joining the Raptors, Ujiri served as general manager of the Denver Nuggets (2010-13). For his work with the Nuggets during the 2012-13 season, he was named NBA Executive of the Year.