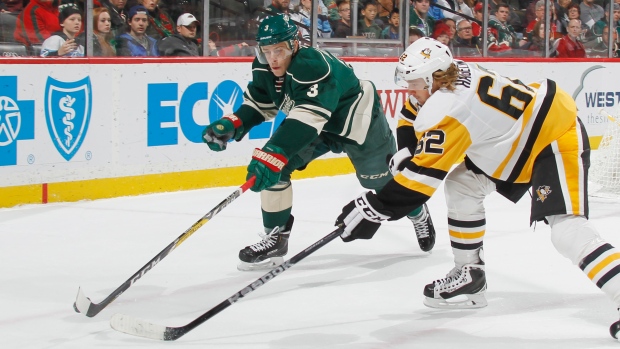 Sitting outside the playoff picture in the Western Conference, it appears the Minnesota Wild are looking to make a move.

Citing multiple sources, Michael Russo of The Athletic reports forward Charlie Coyle is being 'dangled' in the trade market by the Wild.

Russo adds that the Montreal Canadiens, Ottawa Senators and Boston Bruins are believed to have all shown interest in Coyle, with the Canadiens' interest dating back to previous seasons.

Coyle, a first-round draft pick of the San Jose Sharks in 2010, carries a $3.2 million cap hit through next season.

Russo notes the Wild are in need of a right-shot winger with goal-scoring ability to boost their lineup, but may also find themselves needing a centre as well depending on the injury outlook for captain Mikko Koivu. Sources told The Athletic last week that Koivu's initial diagnosis was a sprained MCL after Calgary Flames captain Mark Giordano stuck his leg out to take Koivu down last Thursday. Giordano was given a two-game suspension for kneeing.

The Wild jumped out to an 11-4-2 record this season, but have since slumped to 15-12-2 entering Tuesday's game against the Canadiens.