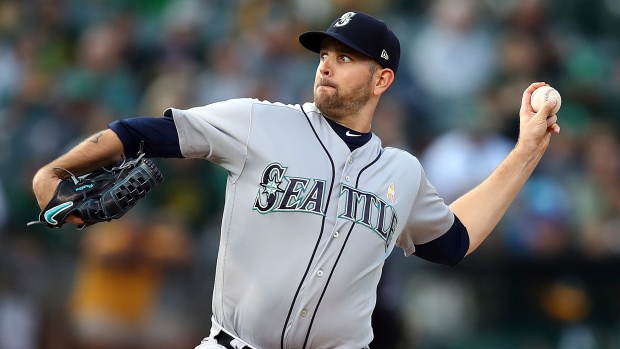 NEW YORK — James Paxton spent the first two months of the 2016 season in the minor leagues after an awful spring training caused his demotion.

When he returned to the majors, he quickly emerged as the Mariners' ace, and now the Yankees hope he can bolster the thin rotation that contributed to New York's loss to Boston in the AL Division Series. New York acquired the 30-year-old left-hander from the rebuilding Seattle Mariners on Monday for top prospect Justus Sheffield and two other minor leaguers.

"I think I'll be a great fit. They seem very committed to winning, and so am I," Paxton said.

New York sent the left-handed Sheffield to the Mariners along with right-hander Erik Swanson and outfielder Dom Thompson-Williams.

"I continue to try to work towards being healthy for an entire season," he said. "All the injuries that I've had haven't reoccurred. I've learned how to make sure those things don't happen again through exercise or whatever."

When he went to Triple-A two years ago, he worked with former big league pitcher Lance Painter, who told him to drop his arm angle back to three-quarters. When Paxton returned to the Mariners, he studied reading swings with pitching coach Mel Stottlemyre Jr.

"It's taken me a little longer I think in my career because I have had so much time off," Paxton said. "But having those larger chunks the last couple years has really allowed me to come into my own and really make some big strides, and I look forward to continuing to make big strides in my game. And I think that my best baseball is still to come."

A proud Canadian, Paxton is also known for keeping his composure as a bald eagle mistakenly landed on his shoulder prior to a start at Minnesota in April.

He joins a rotation projected to include right-handers Luis Severino and Masahiro Tanaka and left-hander CC Sabathia. General manager Brian Cashman wants to add at least one more starter, address the shortstop opening created by Didi Gregorius' elbow surgery and add to his bullpen.

Paxton made $4.9 million last season and is eligible for salary arbitration. He can become a free agent after the 2020 season.

In his one game at Yankee Stadium, Paxton entered with a 10-start unbeaten streak and allowed two-run homers to Aaron Judge and Miguel Andujar in the first inning of a 4-3 loss on June 21 this year.

Seattle decided to rebuild after going 89-73 and finishing third in the AL West, 14 games behind division-winning Houston and six back of Oakland.

"Clearly we've opted 2019 be a year that we take a step back hoping to take two forward," general manager Jerry Dipoto said. "When I say 2020 and 2021, it's simply gauging the ages of the players we're building around here."

Sheffield is rated among the top minor league prospects, made his big league debut in September and pitched in three games for the Yankees. He had a 2.48 ERA in 25 minor league appearances at Double-A and Triple-A this year, striking out 123 in 116 innings and allowing just four home runs.

Sheffield had just finished playing golf when he saw Cashman's number on his cellphone.

Sheffield won't turn 23 until May and could become a future anchor to Seattle's rotation.

Swanson, 25, started the year at Double-A Trenton but spent most of 2018 at the Triple-A level with Scranton/Wilkes-Barre, where he made 13 starts and had a 3.86 ERA. Swanson had 78 strikeouts and 14 walks in 72 1/3 innings in Triple-A. He pitched 121 2/3 total innings last season overall and was rated among the top 25 prospects in the Yankees organization by MLB.com.

"I think both of them are going to compete for a spot in the rotation," Dipoto said. "We absolutely expect to see both guys before the summer is through in Seattle and they will start cutting their teeth here and hopefully set us up for what we think will be a pretty exciting group as we enter 2020 and 2021."

Thompson-Williams, 23, has never played above Class A and will turn 24 next April. He had 22 home runs, 20 stolen bases and a .299 average across two Class A affiliates this year.

Cashman is aggressively pursuing pitching from outside the organization, even after Sonny Gray flamed out during 1 1/3 seasons with New York, shaken by repeated booing at Yankee Stadium.

"I can't tell you we've learned anything further other than we drill down as much as we can, whether with players that have played with somebody as teammates that we know or coaches who have coached or people who have managed or anybody, whether it's all the way back in the amateur ranks," Cashman said. "We just try to ask a lot of questions about how they compete. This environment can bring out a different experience for some. So I don't have a new secret formula to address predictability on who will thrive and survive and who won't here in New York."