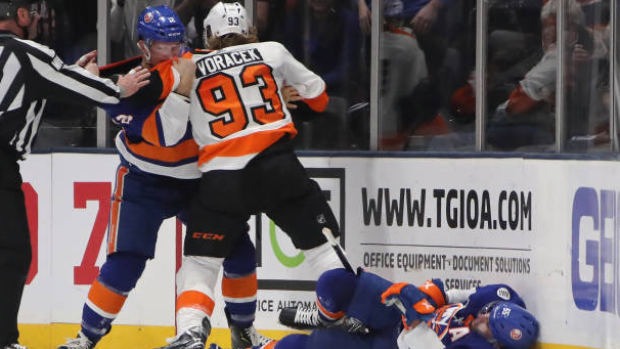 According to multiple reports, the NHLPA has filed an appeal on behalf of Philadelphia Flyers forward Jakub Voracek for his two-game suspension.

Dave Isaac of the Philadelphia Courier-Post believes the hearing could take place ahead of the team's Thursday game against the Washington Capitals, when Voracek is currently slated to sit out his second game.

Hearing that the NHLPA has filed an appeal for Jake Voracek’s two-game suspension. Not sure when the hearing with Gary Bettman will be, probably not in time for tonight’s game, but perhaps in time for him to play Thursday against the Capitals.

He appeared to be respond to the suspension on Twitter by posting five "crying of laughter" emojis.

The 29-year-old picked up a five-minute major for interference on the play during Saturday's 5-2 win.

The Flyers, who sit five points back of the Columbus Blue Jackets for the final Eastern Conference wild-card spot, host the Ottawa Senators on Monday.