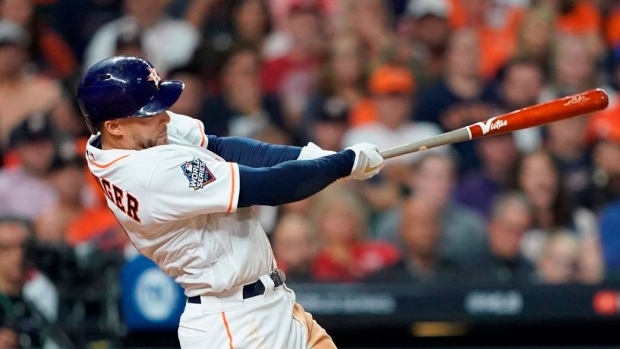 The Blue Jays have signed star free agent outfielder George Springer, with Toronto and the three-time All Star agreeing to a deal on Tuesday pending a physical.

The contract is reportedly for six years and $150 million, a person familiar with the negotiations told The Associated Press.

The Blue Jays confirmed the deal was for six years pending a physical when reached for comment by The Canadian Press, but didn't provide further details.

The 31-year-old Springer was considered one of the premier players available after declining his qualifying offer from the Houston Astros — the team he has spent his entire seven-year career with — in October to become a free agent.

The New York Mets and Blue Jays were reportedly the two frontrunners for Springer, with his name being linked to both clubs for weeks.

The centre fielder was named an All Star for the first time in 2017, and went on to become World Series MVP that season when Houston beat the L.A. Dodgers in seven games for a championship, now tainted by the Astros sign-stealing scandal that became public in 2019, and confirmed by MLB in January 2020.

He was also named an All Star in 2018 and '19, and took home the AL Silver Slugger Award in both seasons.

Springer brings Toronto plenty of playoff experience after reaching the American League Championship Series four seasons in a row, falling just one win shy in 2020 from reaching the World Series for the third time in four campaigns.

This report by The Canadian Press was first published January 19, 2021.