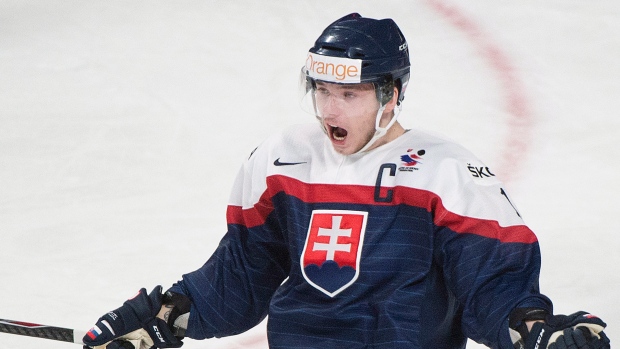 MONTREAL — Martin Reway scored three goals to lead Slovakia to a 5-2 victory over Germany in round-robin action at the world junior hockey championship on Tuesday.

Reway, a Montreal Canadiens draft pick who played two seasons with the Quebec Major Junior Hockey League's Gatineau Olympiques from 2012-2014, scored Slovakia's second and fourth goals of the game and completed the hat trick with an empty netter at 19:05 of the third period.

"It's a good feeling for us," said the 19-year-old Reway. "We believed we can do this, and we are in third place. So that's good for us, and also good for the rankings for next year. It's good for the future of Slovakia."

Robert Lantosi and Matus Sukel also scored for Slovakia (2-2), who led 3-0 after 15 minutes of action.

Frederik Tiffels scored twice for Germany (0-3), including a penalty-shot goal in the third period.

"I can't say I minded the way we started the game," said German coach Pat Cortina. "Then we made some individual mistakes in the first period, and they capitalized on every one of those mistakes. Before we knew it, we were behind 3-0, and then it's catch-up hockey, and that's always difficult to play against a team like Slovakia."