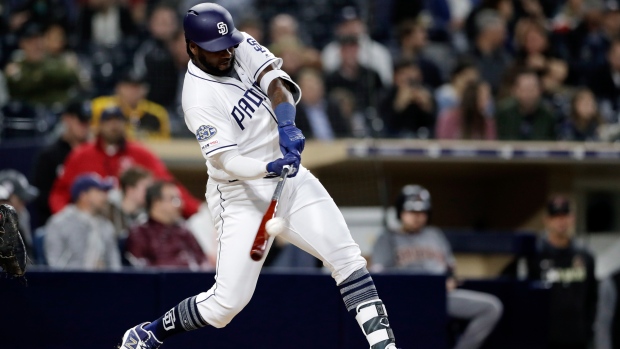 Reyes hit a two-run home run in the sixth inning to lift Paddack and the Padres to a 2-1 victory against the Arizona Diamondbacks on Monday night.

Luke Weaver (3-3) had outdueled Paddack (4-2) and got the first two outs in the sixth before allowing Greg Garcia's two-out single to right and Reyes' homer to centre, his 15th.

"It feels great," said the 23-year-old Reyes, who's in his second big league season. "I didn't feel my hands at all. Hit it right on the barrel."

When he returned to the dugout, he kissed the bat. He said he received a shipment of new Victus bats earlier in the day, the same model as used by teammate Fernando Tatis Jr., who's currently on the injured list.

"As soon as they arrive, I put two in my locker and say those are the two I'm going to use in the game today. That one that I kiss, I took to the cage to do my thing every time I face the pitcher," he said.

"I'm feeling great. Any pitch that they throw close is going to get damaged. I'm seeing the ball pretty good right now."

The Padres snapped a three-game losing streak that had dropped them one game below .500 for the first time this season.

Reyes' homer got Paddack off the hook for a loss and made him the winner.

"I was fired up, man. I knew due to the pitch count and the situation of the game, me being on deck in a close game, that was it for me. When you've got a guy on with two outs and Franmil's up to the plate, man, everyone's off the seats and right there on the rails. He crushed that one."

"It's great, man," Reyes said. "It's really fun to see from the outfield how he attacks the hitters and how he gets fired up and every time he strikes out somebody it's great. Fires up all the team and makes the defence behind him proud."

"That one just hurts," Weaver said of Reyes' home run. "You work your butt off to get to that spot in the game. Knowing how it felt early, stuff was running kind of armside. I just felt like in that pitch it just wasn't the right call and I kind of felt it before I threw it. It's a mental error in my mind where I should just step off and kind of gather and either think about it or throw something else. I think I just tried to do too much with it knowing that balls were running and it just spun out of my hand, and a good hitter, power hitter, put a swing on it."

Said manager Torey Lovullo: "You can't make mistakes to him. We're still trying to identify some soft landing spots where we can live with the damage. He's a good player. He's a good hitter, and when you make a mistake that can happen."

Lovullo added that Weaver, "was unbelievable. He really just made one mistake at the wrong time to the wrong guy. He did everything he could to keep us in this game. Unfortunately we just built a couple of innings and a couple of situations and only scored one run, and that's really the name of the game."

Arizona used small ball to take a 1-0 lead in the third, with Nick Ahmed hitting a leadoff single and eventually scoring on Jarrod Dyson's grounder.

San Diego got into a jam in the seventh when relievers Trey Wingenter and Adam Warren combined to issue three straight walks on 12 straight pitches with one out. Allen then struck out Dyson and got Ketel Marte to ground out to first.

Kirby Yates pitched the ninth for his 18th save.

Arizona manager Torey Lovullo said Zack Godley (1-4, 7.90) is being moved to the bullpen.