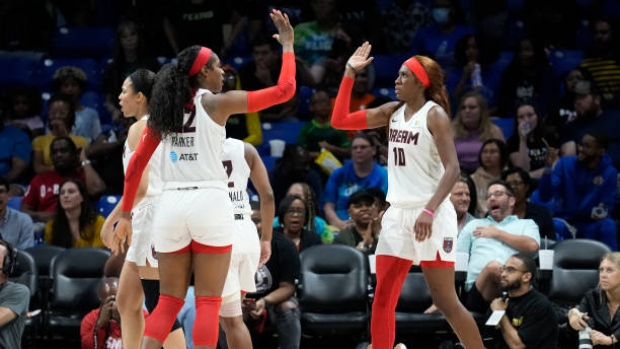 ARLINGTON, Texas -- — Rhyne Howard scored 16 points in her debut for Atlanta, Cheyenne Parker had 10 points, 10 rebounds and three blocks and the Dream beat the Dallas Wings 66-59 on Saturday night in the season opener for both teams.

Dallas shot just 24.3% (17 of 70) from the field. It marked the first time the Dream have held their opponents below 25% shooting and just the 26th time in WNBA history.

Atlanta never trailed and led by as many as 20 points early in the second quarter before going scoreless for five minutes and taking a 39-35 advantage into halftime before Allisha Gray made two free throws to open the third quarter and pull the Wings within two points.

The Dream stretched their lead back to 15 points on a layup by Billings with about eight minutes to play but didn't make another field goal for more than six minutes as Dallas trimmed its deficit to 63-59 when Marina Mabrey made a layup with 2:32 remaining. Wheeler hit a 3-pointer 45 seconds later to cap the scoring.

Mabrey led the Wings with 20 points and Gray added 12 points, nine rebounds and three blocks. Arike Ogunbowale scored seven points on 3-of-14 shooting. It was the 2020 WNBA scoring champion's seventh career game in which she failed to score in double figures and just the second since her rookie campaign in 2019.