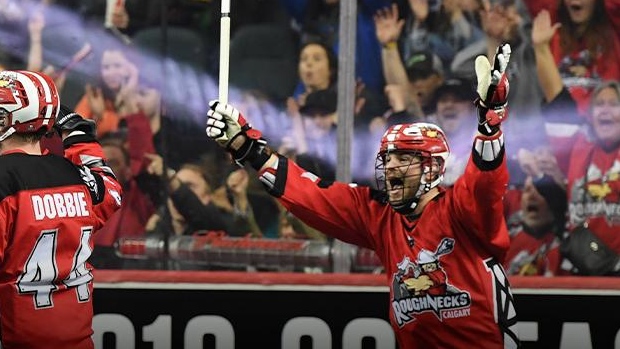 CALGARY — For the first time in 10 years, the Calgary Roughnecks are the champions of the National Lacrosse League.

Rhys Duch's second goal came in overtime as the Roughnecks captured their third NLL title on Saturday night with a thrilling 14-13 victory over the Buffalo Bandits to sweep the best-of-three final.

Duch fired a shot past Buffalo goaltender Matt Vinc 1:12 into extra time to send the Scotiabank Saddledome crowd of 17,038 into a frenzy.

"This is what we live for. It's just a fantastic feeling," said veteran Dane Dobbie, who had four and three assists and was named Most Valuable Player of the final. Dobbie was the post-season's leading scorer with 12 goals and 26 points.

"We deserved this. Our guys worked hard. Our young kids came in and played hard this season and they were great. I'm just super excited right now.," said Dobbie.

Dobbie's spectacular breakaway goal with 55 seconds left in the fourth quarter gave the home side a 13-12 lead, only to see Corey Small tie it 27 seconds later, silencing the raucous crowd.

It was the fourth time in the second half that the resilient Bandits had come back to tie the game.

"Stay even keel. That was written on our line-up from the coach (Curt Malawsky), before the game," said Roughnecks captain Dan McRae. "That's something that we've been preaching pretty much since training camp. To have our emotions in check. Credit to the coaches for instilling that in us."

Chase Fraser and Jordan Durston each had a hat trick for Buffalo. Shawn Evans and Small each added a pair with Chris Cloutier, Matt Spanger and Dhane Smith also scoring.

Christian Del Bianco made 43 saves for Calgary, none bigger than his early stop off Small in overtime. Vinc finished with 37 stops in Buffalo's net.

Bandits co-coach Rich Kilgour applauded the fight in his team, which opened the second half down 9-6, but tied it with three straight goals.

Tied 10-10 entering the fourth quarter in a back-and-forth thriller, the Roughnecks took a two-goal lead on goals 48 seconds apart from Duch and Dickson, who both sent low shot past Vinc.

But the resilient Bandits battled back.

Durston's third of the night cut the deficit in half at 7:49 and Smith's diving goal at 11:07 tied it. Smith's goal was originally waved off for a foot in the crease, but the Bandits challenged the ruling and it was overturned on video review.

Calgary's 9-6 lead at half-time disappeared when Buffalo scored the first three goals of the third quarter.

Dobbie restored the lead at 13:57 before Durston replied at 14:24 to tie it 10-10 headed to the fourth quarter. In the final 15 minutes, the back-and-forth play continued, the Roughnecks took a two-goal lead on goals 48 seconds apart from Duch and Dickson, but Durston's third of the night cut the deficit in half at 7:49 and Smith's diving goal at 11:07 tied it.

"So very proud for keeping coming back. It's too bad we couldn't get the goal to put us over the hump," said Kilgour.

Buffalo (14-4) was the NLL's best team in the regular season, but the East representative could not contain Calgary (10-8), who came out of the third spot in the West to its first NLL Cup since 2009.

After road victories over the San Diego Seals (12-11) and the Colorado Mammoth (8-4) to reach the final, the Roughnecks kept the momentum going with a 10-7 victory in Game 1 of the final last Saturday at KeyBank Center in Buffalo.

"Our guys came in this year and we knew we had something, just within our locker room and we just beared down and I couldn't be more happier right now for the boys," said Dobbie, who was also part of the 2009 team.

Down 5-3, Calgary took control of the game in the second quarter when a string of five straight goals turned a 5-3 deficit into 8-5 lead .

The tying goal at 5:11, 15 seconds after King drew the Roughnecks to within one, was an acrobatic effort from Currier for his first goal of the playoffs.

The sophomore collected a rebound off the end boards and from behind the net, dove into the air and dunked the ball under the crossbar, behind the Bandits unsuspecting goaltender.