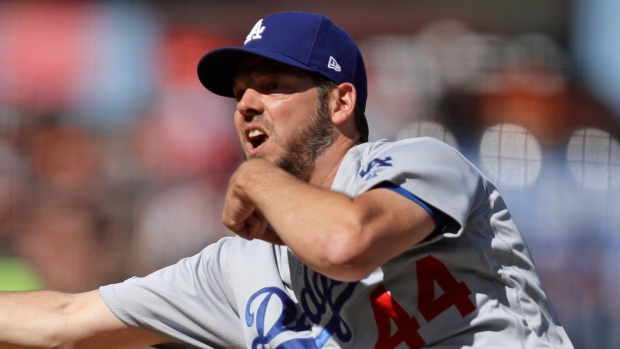 MINNEAPOLIS — After four playoff appearances, including two trips to the World Series, in four years with the Los Angeles Dodgers, Rich Hill was a 39-year-old free agent coming off another elbow surgery.

Unlikely to return until at least June, Hill wanted to find a team to get him back to the World Series. The Minnesota Twins came calling, seeking Hill for just for that reason.

“He’s coming back from an injury, but I think we feel the reward is significant because, qualitatively, he has been a stellar pitcher when he’s been healthy,” Minnesota general manager Thad Levine said. “He’s pitched down the stretch in very tough situations and he’s pitched in the post-season, so I think we’re viewing him as a guy that has every bit a chance to start in a playoff series and that’s important for us.”

Hill signed a one-year, $3 million contract with the Twins. Speaking to reporters at the team’s annual fan festival this weekend, Hill said he will start throwing next week with a goal of joining the Twins on the mound in June.

“It really came down to winning a World Series,” Hill said. “Looking at this locker room and looking at a team that won over 100 games last year was a huge, motivating factor for me in signing here. That’s the main goal for me, to bring as much energy and effort as I can to this clubhouse and help the team obviously get to the post-season, win the division and then win 11 games to hold that trophy.”

There’s never been a doubt of Hill’s ability. The left-handed curveball specialist has a 3.82 career ERA and averages 9.6 strikeouts per nine innings. Health has been the issue. He’s averaged just 62.9 innings per season in a 15-year career in which he’s started 156 of the 284 games he’s pitched.

“Rich, when healthy, has been at different junctures one of the best pitchers in the game, really, for the past four or five seasons,” said Twins president of baseball operations Derek Falvey, who was in Cleveland’s front office in 2013 when Hill made 63 relief appearances for the Indians. “So we just need him to get healthy and be a big part of it. We were looking for guys that can pitch at the top end of a rotation, and he definitely has the ability to do that.”

Hill, who turns 40 in March, was sidelined nearly for three months last season with a strained flexor tendon in his left forearm. He returned in September but dealt with knee pain. He started Game 4 of the National League Division Series against Washington, allowing one run over 2 2/3 innings.

Hill had Tommy John surgery to replace the ligament in 2011 with the Boston Red Sox and didn’t want another long rehab. He opted for primary revision surgery, a relatively new operation that repairs the ligament instead of replacing it.

“It’s only a six-year-old surgery, and it’s had a huge amount of success of people who have had it and come back,” Hill said of the procedure performed by Dr. Jeffrey Dugas. “I think it’s above a 95% success rate, so it’s something that I’m extremely excited about. I know I’m not getting any younger in this game, but I know I have a lot of experience and knowledge to bring to this clubhouse.”

“When it comes to pitching, that dude bears down,” said Twins reliever Sergio Romo, who was with the Dodgers with Hill in 2017. “That dude can play. Especially a healthy Rich Hill, that’s a gutsy Rich Hill, that's a guy who's going to go out there and grind out some innings. He's got really good stuff still. Depending how he recovers from this injury, he's definitely quite the addition, especially for the type of push we're trying to make. The lights don't seem to be too bright for that man in any situation.”