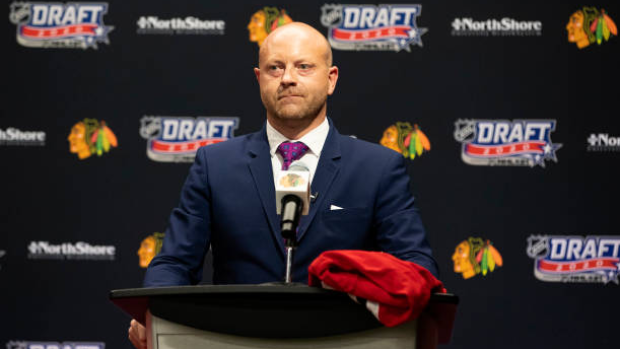 An American think tank that studies child sexual abuse and prevention is asking the U.S. Olympic & Paralympic Committee (USPOC) to suspend Stan Bowman from his position as general manager of the U.S. Olympic men’s hockey team while he faces allegations that he helped cover up the sexual abuse of two Chicago Blackhawks players.

In a Sept. 10 letter to USPOC chief executive Sarah Hirshland, Marci Hamilton, founder of the advocacy group Child USA, wrote that Bowman, who is also the current GM of the Blackhawks, should be suspended by USA Hockey.

“I write to you today to request the suspension of Stan Bowman from his position as general manager of the U.S. Olympic men’s hockey team and that an independent investigation into Bowman’s behavior in his role as general manager of hockey operations of the Blackhawks NHL team be conducted,” Hamilton wrote.

Child USA provided TSN with a copy of Hamilton’s letter, which was also addressed to USOPC chair Susanne Lyons, its board members, and Elizabeth Ramsey, executive director of the USOPC’s Athletes’ Advisory Council.

Hamilton said in a phone interview on Saturday that she decided to engage in the Blackhawks’ scandal because she sees it as evidence of a repeated pattern.

“This is the paradigm we keep seeing,” Hamilton said. “Not only do we have a perpetrator, but powerful institutions are essentially ignoring the fact that they have an abuser in their midst. This isn’t just a church or a boy scout problem. It’s a societal problem and this is a great example of that.”

Spokesmen for the Blackhawks and USA Hockey did not respond to requests for comment. A USOPC spokesman said he was unaware if the committee's leadership had received the correspondence.

Blumenthal and Moran led an 18-month investigation into systemic abuse within the U.S. Olympic movement and advocated for the passage of the Empowering Olympic, Paralympic, and Amateur Athletes Act, which was passed in October 2020 and imposed reforms in the Olympic world, forcing more oversight of the coaches and executives who control the sports.

The act permits Congress to dissolve the board of directors of the Olympic committee and to decertify offending national governing bodies.

“What we’re seeing now with the Blackhawks and USA Hockey is shocking not because of the behaviour of the predator,” Hamilton said in an interview. “What’s shocking is that it’s been 19 years since we learned, thanks to the Boston Globe journalists, how the bishops in the Catholic church repeatedly covered up sexual abuse by priests. This hockey case is shocking because by now people should know the proper way to respond to allegations like this.”

The Boston Globe's team of investigative journalists in 2002 published a series of stories detailing a pattern of sexual abuse of minors by priests and a widespread culture of cover-up.

Congressional hearings to discuss reforms of the USOPC are scheduled for Wednesday and Hamilton said that her staff has scheduled time with Blumenthal and Moran’s staff before then to make sure they are briefed on the Blackhawks case.

“I know that the senators are going to be interested in this,” Hamilton said in an interview.

Hamilton’s letter recounts allegations made against Bowman and his Blackhawks management colleagues in a pair of lawsuits filed earlier this year in Chicago against the team.

One lawsuit, filed by a former Blackhawks player referred to as “John Doe 1” in court documents, alleges that after the team’s management was informed that former video coach Brad Aldrich had allegedly sexually assaulted two players during the 2009-10 season, the team allowed him to remain employed through the end of that season, and refused to report the allegations to police.

A second lawsuit filed by a former high school hockey player in Houghton, Mich., who is referred to as “John Doe 2” in court documents, alleges that the Blackhawks gave Aldrich a positive job reference that allowed him to secure positions within the hockey department of Miami University in Ohio and later as a high school coach in Houghton, where in 2013 he was convicted of sexually assaulting the then-16-year-old player.

The Blackhawks have claimed in court documents that the team investigated the allegations and found them to be meritless. The team said in a court filing on Friday that the former Blackhawks player’s lawsuit should be dismissed because of limitation periods, The Chicago Sun-Times reported.

With media scrutiny over the scandal increasing, the Blackhawks in June hired Chicago lawyer Reid Schar to look into the claims. The Blackhawks say the investigation is independent and that they will make Schar's findings public. The NHL has said it's awaiting the results of Schar's investigation before taking any possible action.

“This investigation is not neutral,” Hamilton wrote in her letter to the USOPC. “A truly independent investigation cannot be funded by the organization whose executives reportedly covered up Aldrich’s abuse. Miami University has opened an internal investigation, but the scope is limited to the four months he was employed at the University.

Based at the University of Pennsylvania, Child USA has lobbied federal and state governments in recent years over issues including expanding statutes of limitations to provide victims of childhood sexual abuse with more time to file lawsuits related to their abuse.

Hamilton wrote the first draft of the Child Victims Act, which was passed in January 2019 by New York state. Accusers in the state can now file lawsuits until they are 55. Before the new law was approved, victims of childhood sexual abuse had until they were 21 to sue the institution where the abuse took place, and until 23 to sue their attacker.

Hamilton also referred in her letter to the USOPC to disgraced USA Gymnastics and Michigan State University doctor Larry Nassar, who was sentenced in 2018 to 40 to 175 years in prison after more than 150 women and girls said in court that he sexually abused them over two decades.

“Just as there is a public demand for accountability and transparency from USA Gymnastics in light of the Nassar abuse case, I ask for accountability from USOPC regarding Bowman’s alleged role in covering up Aldrich’s abuse,” Hamilton wrote. “It is unacceptable to allow Bowman to serve in his role as General Manager of the U.S. Olympic men’s hockey team while an investigation is ongoing.

"…I request that Bowman be removed from USA Hockey, or at the very least be put on leave while a truly independent investigation considers his response to Aldrich’s abuse. How many more cases and cover ups of abuse need to occur for USOPC to finally take sexual abuse seriously?”

It’s unclear whether the USOPC has the legal ability to force USA Hockey to place Bowman on administrative leave, said a person familiar with the matter.

At the least, the USOPC could refuse to provide him with a credential to attend the 2022 Winter Olympics in Beijing, the person said. Given the Olympic reforms passed in congress, if any elected officials show an interest in the case, it would be more likely the USOPC would pressure USA Hockey to address the allegations against Bowman, the person said.