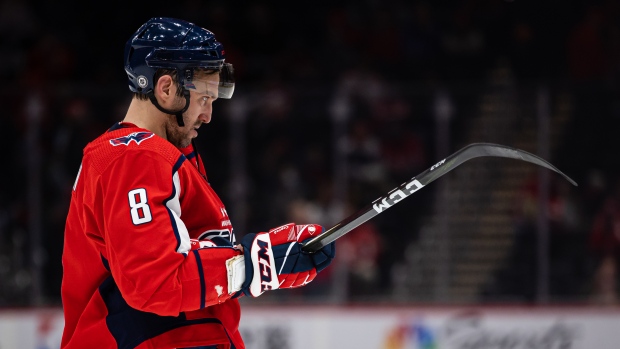 “We are very sad to witness, like the rest of the world, what is happening in Ukraine,” Nabih wrote in an email to TSN. “Although Mr. Ovechkin is not responsible for the Russian government’s actions, we took the decision to not use him (or any Russian player) on any global CCM communication at this point.”

Nabih did not respond to subsequent questions about CCM’s contracts with Ovechkin and other Russian players, including

“Be a part of this team,” Ovechkin wrote in an Instagram post at the time. “To me it’s a privilege, it’s like the feeling of when you put on the jersey of the Russian team, knowing that the whole country is rooting for you.”

In a press conference on Feb. 25, Ovechkin was asked whether he still supported Putin and whether he would condemn Russia’s invasion of Ukraine.
“Like, I’m Russian, right?” Ovechkin said. “Sometimes some things I can’t control. You know, it’s not in my hands… Please, no more war. It doesn’t matter who is in the war, Russia, Ukraine, different countries... We have to live in peace and a great world.”

Asked about his support of Putin, Ovechkin responded, "He's my president, but I'm not in politics. I'm an athlete."

Ovechkin has been among CCM’s most visible pitchmen. The Montreal-based company pays Ovechkin more than $500,000 per year plus a percentage of its sales within Russia, said an industry source who is familiar with the matter.

CCM, which also has endorsement contracts with Connor McDavid and Auston Matthews, first began as an Ontario bicycle manufacturer in 1899. As hockey began more popular, the company pivoted and began producing ice skates.

It's unclear whether the Capitals will change their approach to marketing Ovechkin in their home market, one of the largest U.S. media markets. A team spokesman did not respond to a request for comment.

Ovechkin used CCM products early in his NHL career and, after working as a spokesman for Bauer Hockey for years, returned to CCM in 2017 when he signed a long-term deal with the company.

Even if it stops featuring Ovechkin and other Russian players in ads, the industry source said it’s unlikely that CCM would try to end its contracts with those players.

“You don’t want to end up in court with them suing you for breach of contract,” the source said. “Better to just pay them out, lie low, and see where the world goes over the next year.”