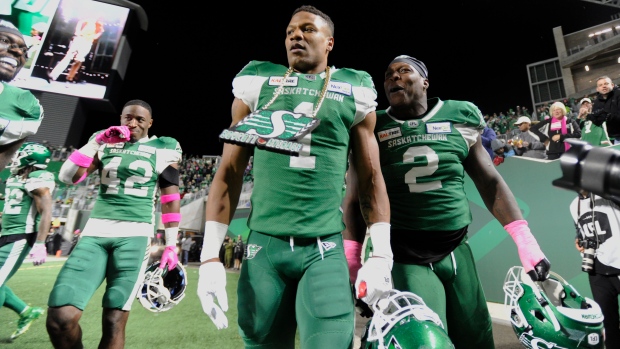 REGINA — The Saskatchewan Roughriders believe it’s time to turn regular season success into a run for the Grey Cup.

The Riders, who host the Calgary Stampeders on Sunday in the West Division semifinal, were first in the division in 2019 and second in 2018, but neither finish translated into post-season success.

They lost 20-13 to Winnipeg in the 2019 West final and 23-18 to the Blue Bombers in the 2018 West semifinal despite having home-field advantage in both games.

With a 9-5-0 record this season, which was good enough for second place, the Riders are now focused on taking the next step to becoming a championship team.

“We know something different from the guys who've been here in 2018 and 2019 and have been a part of those home playoff losses,” said Riders head coach Craig Dickenson. “Everybody knows that as you get older you realize your chances are fewer and fewer and I do sense that with guys like Dan Clark and Micah Johnson and AC Leonard. They know that there's only so many cracks at it so they want to want to make a run while they can.

“Some of the rookies think you're going to be in the playoffs and make a run every year or have a chance to but the veterans know that even though it's a nine-team league, it's hard to win the Grey Cup and you only get so many cracks at its so I think there's a little more urgency in the locker room.”

Many pundits believe the Riders are the underdog despite their regular-season record. While they did earn nine wins, the Rider offence has struggled throughout the season. And the Stampeders won two of their three regular-season meetings with Saskatchewan.

While the Riders consider the underdog label insulting, receiver Shaq Evans believes they may be partly responsible for the status.

“I think it might be a little disrespectful but at the end of the day, we haven't done anything in the playoffs and that's what matters the most,” said Evans. “We've had great regular seasons since I've been here so maybe we’re a little underappreciated, but it may be warranted a little bit because we have to prove that we can do something when it matters most.”

Dickenson said there isn’t a magic formula to stopping Carey.

“You try and make him earn it and try to put as many helmets on him as you can make him so early in the game,” said Dickenson. “Hopefully you can take him out of his rhythm a little bit but he's good when he's rolling. He gets stronger as the game goes on so we want to start fast and try to be as physical as we can early in the game, but he's a good player.

“If he goes off, it's going to be a long day for us at this point, based on those three games.”

Players on both teams spoke during the week about the intense rivalry between the clubs, but no one was willing to go on the record with a brazen comment that could end up serving as motivation for their opponent.

However, Riders defensive back Ed Gainey did share a quick thought on his impression of the Stampeders.

“I'm just going speak for myself. I mean, I've been here for three, four or five years so I can't stand either Calgary or Winnipeg,” said Gainey. “I wouldn't want the playoff picture to be the other way.”

LATE SEASON PUSH: Both teams signed veteran receivers for their playoff runs. Duke Williams joined the Riders in October after spending time with the NFL’s Buffalo Bills and Los Angele Rams. A CFL all-star in 2018 with Edmonton, Williams has played four games for the Riders, catching 17 passes for 285 yards and one touchdown. Reggie Begelton returned to the Stampeders on Nov. 1 after attending training camp with the NFL’s Green Bay Packers. A CFL all-star in 2019, Begelton has played two games in his return, hauling in nine passes for 133 yards and one touchdown.

Note to readers: This is a corrected story. A previous version had the erroneous line "The Stampeders won two of their three regular-season meetings with the Stampeders." In fact, the Stampeders defeated the Roughriders twice in the regular season.