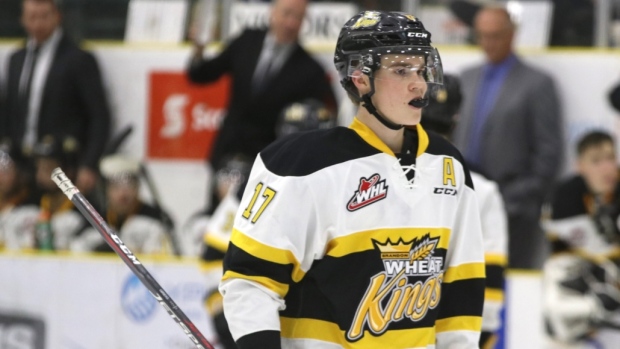 "He's a really easy guy to​ talk to after games," the Brandon Wheat Kings forward said. "This year, I'd always call him after the game and share my thoughts and he'd give me some tips and tricks and tell me what I can do better and work on."

Mark, the 15th overall pick in the 1990 draft, works as an amateur scout for the Philadelphia Flyers and offered insight on what teams will be looking for – both on the ice and in interviews.

The Flyers own the 23rd overall pick in October's draft and Greig ranked No. 24 on Bob McKenzie's final prospects list, but Philadelphia hasn't done a formal interview with the Lethbridge, Alb. native.

"I haven't talked to the Flyers pretty much ​at all," Greig revealed, "but I talked to my dad a little bit about it. I kind of told him not to draft me. I know he doesn't want to pick me either. That's just kind of the way we're thinking with that ... Kind of like to be on another page somewhere else and not under my dad or whatever."

Greig is likely to become a fan favourite wherever he lands, based on the way he plays. Despite standing just 5-foot-11 and weighing in at 162 pounds last season, Greig is not afraid to engage physically. He racked up 83 penalty minutes to go along with 60 points in his 56 Western Hockey League games.

Greig spoke to TSN this week and explained the origin of his feisty play and how he rose up NHL Central Scouting's list during the second half of the season.

What's the best advice your dad has given you?

"Just compete and [give] effort and do it every day. You'll have your bad days and bad games, but as long as the effort is there and compete is there, you're going to be alright."

Where does your feistiness come from?

​"The biggest season when it came into my game was the 16-year-old year I had in Brandon. You know, didn't get a lot of opportunity, wasn't having the puck a lot, so I tried to do anything I could to make a difference – whether it's hitting or laying the body or being a competitive guy. There's kind of a joke running around that I get it from my mom."

Your mom's more fiery that your dad?

"Maybe, yeah. She gets pretty into the game."

You were suspended twice last season. Is discipline something you need to work on or is this simply something that's going to happen with the way you play?

"You can work on maybe not trying to have as many penalties as I had this year, but playing the way I do, penalties are going to come and go. With the suspensions, I wish I didn't have those, but kind of just the way it went and can't do anything now."

Brandon has Ridly Greig out indefinitely with a suspension and now could be without Ben McCartney as he was given 5 and a GM for charging Winnipeg's Michal Teply tonight pic.twitter.com/7YYkpMnOiZ

Is it hard to harness the emotions sometimes, especially with the way you play?

"I try to play with emotion on the ice. I try not to do any stupid things or take any stupid penalties, but I think most of my penalties were good penalties."

You also draw quite a few penalties and 26 of your 60 points last season came on the man advantage. What makes you effective on the power play?

"We had a good team power play. We had [Braden] Schneider at the top there and we liked making plays back and forth. I see the ice [well] on the half wall where I played this year. I think I played that position pretty well. We had good players on the power-play unit, and we connected well."

TSN director of scouting Craig Button compares your game style to Nazem Kadri. Is there a player in the NHL that you see as a role model?

"My favourite player growing up was Claude Giroux. He kind plays the same way with that compete and grit. And, obviously, Kadri too. I like watching the way he plays with the compete and in-your-face game and world-class skill. So, it's those two guys for me."

You mentioned Schneider, who is another top prospect in the upcoming draft. For the team that takes him, who are they getting?

"They're getting a big, strong defenceman. He kind of takes over games in the defensive zone sometimes. He's so strong. He's hard to get by and he's got a really good stick. On the offensive side of things, he's a good first-pass player."

Before the pause you were on an eight-game point streak and NHL Central Scouting bumped you up from No. 25 in their midterm ratings of North American skaters to No. 14 on the final list. Where did you take the biggest step down the stretch last season?

"Coming out of that Top Prospects Game in January, I had maybe some more opportunity and more confidence and everything connected for me. And our team kept on winning. We had a 10-game winning streak and [individual] success comes from team success and it just took off for me there."

What have you been focusing on during this long off-season?

"The main thing for me is just trying to get my weight up. My strength may be on the weaker side of things, so just trying to build my body and get stronger."

What progress have you made?

"Still working on it. I added a couple pounds, but it's going to be a long process. With my body type, I just got to keep on eating and sleeping and working away."

Have you changed your diet much?

"Pretty much just pounding as much food as I can. My dad drills me with food and protein shakes."

Earlier this month Karlskrona HK of HockeyEttan​, Sweden’s third tier professional league, announced you'd be starting the season with them, but those plans have been scrapped. What made you interested in that option and what happened next to keep you in Brandon?

How will you stay sharp waiting for the WHL season?

"I'm not quite sure yet, but probably my family, grandparents, aunties, uncles, whoever's around, maybe have a couple friends come over. Who knows? But looking forward to it for sure."

Anyone who has played the @WheatCityGolf course knows the 13th hole can be a tricky par 3. But @RidlyGreig made it look easy this week getting his very first hole in one. Congrats, Ridly! #BWK 🌾👑 pic.twitter.com/DyBOGBvXdn

Finally, I got to ask, what's it like hitting a hole-in-one?

"Pretty good. I was in a foursome with [Brandon teammates] Chad Nychuk, Braden Schneider and Ben McCartney and we didn't see it go in, but when we drove up there and saw the ball in the hole we were pretty fired up, so a pretty good feeling."

Did you have a sense it was a good shot? Were you looking in the hole right away?

"We knew it was going to be close. There's kind of a ridge in the green so you couldn't see the hole or if the ball was going in, but it was a good shot coming off the stick. It was Chad who said he heard it hit the flagstick, but no one else heard it. Sure enough, it was in the hole."

What club did you use? Had you played that hole a lot previously?

"Six iron. I played it maybe 10 times. Guys call it the hardest hole on the course, so it's a pretty wild green. It's kind of straight downhill so definitely pretty lucky to get a hole-in-one there."

Do you get anything other than bragging rights?

"I filled out some form and may get a plaque or something with my name on it. I guess that's a keeper."

Are you a big golfer?

"This year was kind of the first year I drilled at it, maybe playing 40 rounds. Lots of my buddies are playing now, so it's good to get out there with the guys and play a round."