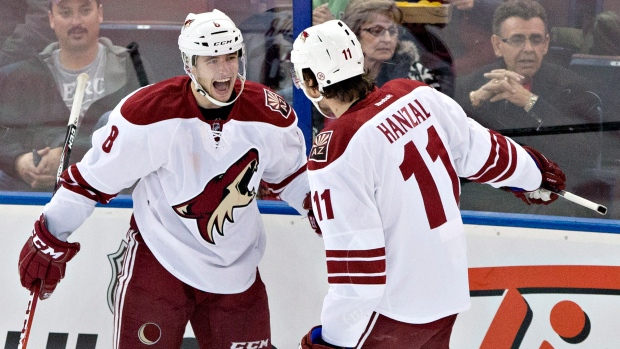 Tobias Rieder scored two short-handed goals on the same penalty kill as the Arizona Coyotes snapped a three-game losing skid with a 5-2 victory over a hapless Edmonton team.

Ference said there's simply no excuse for coming out to start the second period with a 1-0 lead and a power play but allowing two short-handed goals.

"You come in here, you're up a goal and I don't think (Arizona) had a good period," said Ference. "Guys are letting their guard down, and we're in no position to be doing that — to be taking a rest and relaxing. We start the period with a power play and we're looking for some jump. You're looking for some momentum and it's a matter of falling into old habits, floating around and expecting the other team to lie down because you're so great.

"It doesn't happen, we made the same mistakes, it cost us games and it definitely puts you in a hole again. We allow two on the same power play, it's a joke."

Edmonton has not won at home since October, and remains winless against Western Conference opponents, dropping to 0-12-3 in that category.

Viktor Fasth, who started in net for the Oilers, agreed with Ference that a team simply can't allow two short-handed goals on the same power play.

"Giving up two short-handed goals at the beginning of the second, it's not a good thing to do," said Fasth. "I wish I could have made at least one of those two saves and kept us in the game. But they scored four in the second period and we didn't manage to battle back."

Ference said that something clearly has to change for the Oilers, because what is happening now isn't even close to working.

"The definition of insanity is doing the same thing over and over again when it doesn't work," he said. "Do you try it again or look for a different path. I think that you've seen that with some of the mistakes, that's what it is, insanity."

Rieder said his two short-handed goals will be something he remembers for a long time.

"I obviously wasn't expecting anything like that," he said. "It is just amazing that we scored two short-handed goals. That was really exciting, I'm not sure if I really realize what happened yet. It's pretty hard to even score goals on the power play in this league, let alone to get two shorthanded that quickly."

Oliver Ekman-Larsson, Mikkel Boedker and Martin Erat also scored for the Coyotes (10-12-3), who won for just the second time in their last seven games, extending their point streak against Edmonton to a franchise-record 16 games.

"I'm glad that the leadership in this room came out and grabbed this game," said Coyotes coach Dave Tippett. "We played a lot of the game the right way. Our special teams were excellent, obviously with Toby getting those two short-handed goals, but also getting a couple on our power play. It was a much-needed win.

"Now the challenge is to continue this night in and night out."

Coyotes goalie Mike Smith, who snapped a personal seven-game losing streak, said he hopes that this is the start of a turnaround for his team.

"Now is an important time for us," he said. "It is a lighter month for us and we need to get back in the hunt before Christmas. We are done talking and having meetings. We know what we have to do now. It's just about going out there and doing it.

Edmonton actually started the scoring on the power play five-and-a-half minutes into the first period as Smith lost the handle on a Taylor Hall shot, with the puck landing in the blue paint for Eberle to swat his fifth of the season into a wide-open net.

However, the Oilers came unglued to start the second period, allowing two short-handed goals on the same power play.

Just 36 seconds in, Hall coughed up the puck in the neutral zone and Rieder went in on a breakaway, tucking his third of the season through Fasth's legs.

Rieder scored his second short-handed goal on the same Edmonton man advantage just 58 seconds later as Martin Hanzal blocked a shot and sent the former Oiler draft pick up the ice with speed. Rieder outraced defender Nikita Nikitin before cutting in on net and scoring.

The Coyotes made it 3-1 with their third goal in a span of 4:17 as Ekman-Larsson scored a power-play goal on a shot through traffic from the slot.

Edmonton started to push back a little just past the midway point of the second period, but Smith came up with huge saves on Mark Arcobello and Tyler Pitlick to maintain the two-goal advantage.

Arizona went up 4-1 with 17 seconds left as Boedker picked up a loose puck in front and showed deft hands to corral it and tuck in his eighth of the season.

The Coyotes took a four-goal lead two minutes into the third on the power play as a Michael Stone shot went wide but came off the boards right to Erat at the other side of the net for the goal.

Edmonton got one back a couple minutes later as a Petry point shot deflected off a Coyote defender in front and past Smith to make it 5-2.

Arizona will play again on Tuesday when it travels down the road to face the Flames in Calgary. The Oilers make a quick one-game trip to Winnipeg to face the Jets on Wednesday.

Notes: It was the third of five games between the Oilers and Coyotes this season. Arizona has won all three games. The Coyotes last lost in regulation to Edmonton on Jan. 25, 2011, with head coach Dave Tippett coming into the game with a 17-2-3 record against Edmonton in his tenure in Arizona… The Oilers franchise record for longest winless streak is 14, from Oct. 11-Nov. 7, 1993… Edmonton forward Tyler Pitlick made his season debut on Monday after being recalled from the Oklahoma City Barons of the American Hockey League on Sunday… Out with injuries for the Oilers were Benoit Pouliot (foot) and Matt Hendricks (leg), while the Coyotes were without the services of David Moss (hand) and Brandon Gormley (lower body).