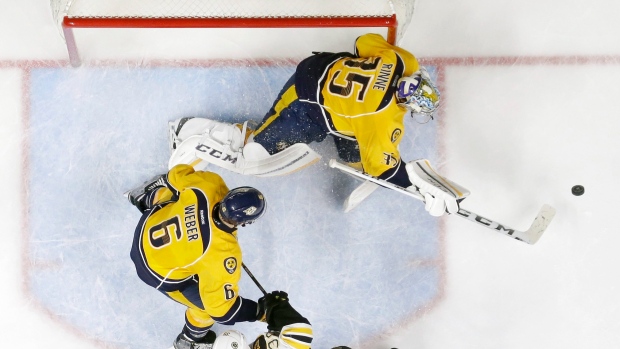 Rinne made 29 saves, Filip Forsberg had a goal and an assist and the Nashville Predators beat the Boston Bruins 2-0 on Thursday night.

"They didn't get much, but at the same time, I didn't think we battled or we worked hard enough to get on the inside and for the longest of time there, we just seemed to be playing on the outside and making it easy for their goaltender to make those saves," Boston coach Claude Julien said.

Seeing his first action in nearly a week, Rinne was sharp throughout. He made his best save 8:39 into the second when he denied Brad Marchand's deflection from just outside of the crease. The shutout was Rinne's third of the season and 39th of his career.

"That was a big game and it feels really good," Rinne said. "It's been a while since last shutout and it's always a big win against Boston. We've struggled at home a little bit and thinking about that, that's a big win too."

Rinne is 4-0-1 in his career against Boston.

The Bruins have lost two of three. Tuukka Rask made 22 saves.

Carter Hutton started Nashville's previous two games and got a win and an overtime loss.

Smith scored the game's first goal at 2:51 of the opening period.

From the right side, Forsberg slid a pass to Smith in the low slot, where he lifted a wrist shot high to Rask's stick side.

Forsberg doubled the Nashville lead at 14:37 of the first.

Rask stopped defenceman Mattias Ekholm's backhand attempt from the low slot, but he kicked the rebound onto Forsberg's stick in the lower part of the right circle. From there, Forsberg had an easy put-back for his 20th goal of the season.

Forsberg was a little surprised to see his fellow Swede shooting from that spot.

"A little bit (surprised) actually," Forsberg said. "I wanted it with a pass, but he shot it on net and I found the rebound, so it was a good goal."

Forsberg has six goals in his last six games.

Nashville killed Ekholm's cross-checking penalty late in the third. Rask was pulled for an extra attacker for nearly the full 2 minutes of the power play.

Nashville blocked 20 shots in the game, 10 in the third period.

"Our guys have never shied away from blocking shots," Nashville coach Peter Laviolette said. "They're good at it and they're willing to sacrifice their body. It's big down the stretch. Six-on-4s are tough."

NOTES: Ribeiro has posted two assists in two of his last three games. ... Thursday was the fifth stop on Boston's season-long six-game trip. They conclude the trip Saturday in Dallas. ... Nashville won both meetings between the teams this season.