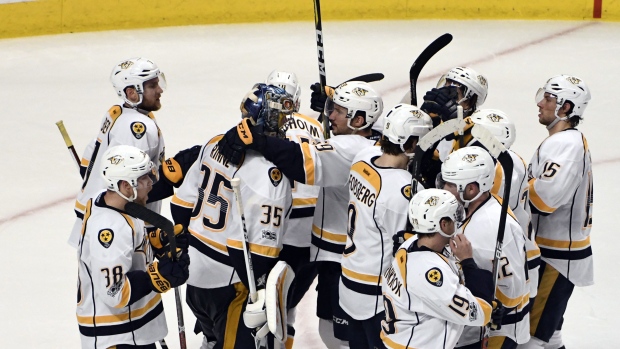 CHICAGO — The Nashville Predators jumped in front of shots and got in the passing lanes for most of the night. On the precious few occasions that the Chicago Blackhawks found an open look, Pekka Rinne was there.

Rinne made 29 saves, Viktor Arvidsson scored in the first period and the Predators beat the Blackhawks 1-0 on Thursday in Game 1 of their first-round playoff series.

"It is a good confidence-booster for us," Rinne said.

The Predators did not have a 1-0 victory during the regular season. Game 2 is Saturday night at the United Center.

"We've got to keep on it," Nashville defenceman Ryan Ellis said. "I think they played a great game over there. Peks was phenomenal for us. We defended hard, but I think we're going to have to attack the game more and create more chances."

Corey Crawford had 19 saves for Chicago, which got centre Artem Anisimov back from a leg injury that sidelined him for the last part of the season, but struggled to find many good opportunities against a sound defensive performance by Nashville.

"We've got to be more desperate, need more desperation around the net in that willingness to get there and fight through it and pay the price, whatever's there," coach Joel Quenneville said.

The Blackhawks, who won the Central Division with the most points in the Western Conference, are going for their fourth Stanley Cup championship in the last eight seasons. They eliminated Nashville during two of those title-winning runs, including in 2015 when the Predators blew leads of 3-0 in Game 1 and 3-1 in Game 6 of their first-round series.

This time, they held on — thanks to a super performance by Rinne.

Chicago controlled much of the last two periods, but Nashville blocked several shots from the perimeter and stymied the Blackhawks when they tried to find a better chance. Rinne also stepped up at key moments in his second career playoff shutout.

"We did a really good job messing up their systems," Rinne said, "and didn't give them too much flow. They like to play with a lot of speed and puck possession, and we did the right things on the ice."

After Ryan Johansen was sent off for delay of game 9 seconds into the second, Rinne denied Patrick Kane and Trevor van Riemsdyk on the resulting power play. Ryan Hartman found Marian Hossa on a counter midway through the second, but he wasn't able to get much on the shot and Rinne turned the rush away.

The Predators killed off another power play in the third and then kept the Blackhawks away from the net after they pulled Crawford with 1:55 remaining.

"It looks like they're kind of playing a 1-4 in the neutral zone, which is fine," Kane said. "We're going to have to find ways to fight through that and more than likely, that comes with dumping the puck and hopefully getting pucks back, making them play in their end.

Boosted by a raucous, red-clad crowd of 22,075, the Blackhawks got off to a fast start. But the Predators eventually started to control the action, and their high-scoring top line of Arvidsson, Johansen and Filip Forsberg silenced the fans with one nice sequence.

Even with three Blackhawks in the area, Johansen managed to play the puck over to Forsberg in the high slot. Forsberg then threw it toward the net and Arvidsson tipped it by Crawford at 7:52.

"It was a great play by Filip and I just had my stick there and it was nice," he said.

It was Arvidsson's fourth goal in his last four games against Chicago. The speedy winger set career highs with 31 goals and 30 assists in a breakout performance this season.

Arvidsson nearly picked up a second goal in the first, but he was denied by Crawford on a prime opportunity with 4:22 left. He also had a backhander go off the crossbar with about 4 minutes in the third.

NOTES: Predators F Colin Wilson was scratched with a lower-body injury. Wilson had 12 goals and 23 assists this season. ... The Blackhawks recalled G Jeff Glass from Rockford of the AHL. Glass was inactive as the team's third goalie. ... Chicago was shut out in a home playoff game for the first time since 2012 against the Coyotes.