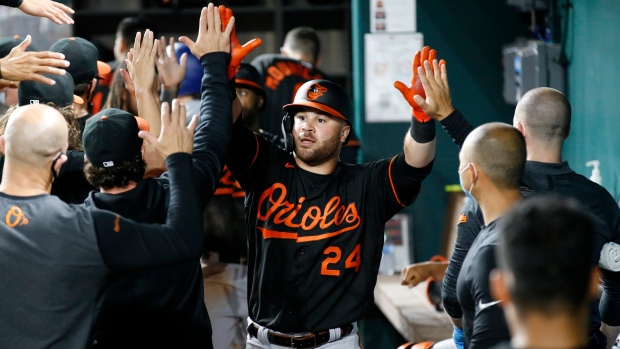 ARLINGTON, Texas — Rio Ruiz and D.J. Stewart homered while Jorge López struck out eight in five innings, leading the Baltimore Orioles to a 5-2 victory over the Texas Rangers on Friday night.

No. 9 hitter Freddy Galvis had two extra-base hits and scored twice for the Orioles, who improved to 5-2 on the road this season. They were 1-6 in their first homestand, and had to play two doubleheaders against Seattle in the previous three days after a couple of postponements.

“It was huge just momentum-wise, confidence-wise,” Stewart said of the 5-0 lead the Orioles had after his two-run homer in the fifth. “It was big for us to get some early and kind of put them away.”

A week after getting no-hit by San Diego Padres right-hander Joe Musgrove, the Rangers didn’t have a hit off López (1-2) until David Dahl and Nick Solak started the fifth with back-to-back homers. Those were the only hits allowed by López, who had given up 11 runs over 8 2/3 innings in his first two starts.

“So encouraged by his first four innings. ... Just dominating. I'm hoping he can build off this one,” manager Brandon Hyde said.

“So much better,” López said. ”That’s one thing I’ve been working so hard since spring training, since off-season, feeling good every outing."

César Valdez, the fourth Baltimore reliever, worked around two baserunners in the ninth for his third save in four chances. He struck out Jose Trevino, who fouled off three consecutive two-strike pitches before swinging and missing a changeup to end it.

Baltimore pitchers combined for 15 strikeouts while the Rangers, who were coming off three wins in a row at defending American League champion Tampa Bay, had only four hits.

“I just know 15 punchouts and one walk on the offensive side isn’t going to get it done,” Rangers manager Chris Woodward said. “I feel like that guy (López) came at us and attacked us and we didn’t attack back.”

Seven of the first 10 Rangers batters struck out, and they didn’t have their first baserunner until Joey Gallo drew a two-out walk in the fourth.

Galvis opened the third with a triple before leadoff hitter Cedric Mullins doubled him home, and Ruiz went deep off Mike Foltynewicz (0-3) in the fourth. Anthony Santander hit a sacrifice fly in the fifth, scoring Galvis after he started the inning with a double, and Stewart homered.

Foltynewicz, who has made all three of his starts at home, allowed five runs and seven hits over five innings. He struck out six and walked one.

After Dahl hit his first Texas homer to start the fifth. Solak followed with an opposite-field drive just over the fence and beyond the glove of right fielder Santander.

GALLO GETTING ON BASE

Gallo has reached safely in all 14 games, the longest such season-opening streak for the Rangers since 2008, when Ian Kinsler reached in the first 25 games and Milton Bradley had a 15-game streak to start that season. Gallo was the only Texas baserunner against Musgrove in the first-ever no-hitter thrown by the Padres, when he was hit by a pitch.

GOOD TO BE INSIDE

It was Baltimore's first game at the $1.2 billion Globe Life Field, where the retractable roof was closed on a night when it was 59 degrees and still misty after raining throughout the day.

Orioles: LF Austin Hays (right hamstring strain) was set to play games at the team's alternate site Friday and Saturday. Hyde said the Orioles will see how Hays recovers from those, and that he could be activated from the injured list as early as Sunday for the series finale in Texas, or Tuesday in Miami.

Rangers: LHP Joely Rodriguez (left ankle sprain) was activated from the injured list and was on the active roster for the first time this season. The club optioned right-hander Josh Sborz to the alternate training site a day after his first big league victory. ... OF/DH Wilie Calhoun (left groin strain) and 3B Brock Holt (right hamstring strain) both could be activated Saturday.