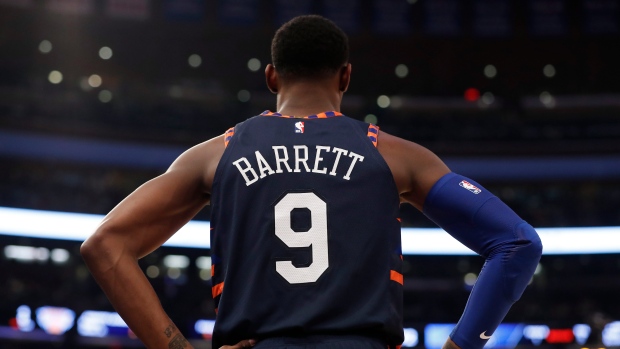 “It bothered me. It bothered me a lot. I don’t understand why that happened," the New York Knicks guard said, adding that he's using the snub as a motivational tool going forward.

RJ Barrett said it "bothered him a lot" he didn't make one of the All-Rookie teams last season. Said he didn't understand why he didn't make it, but that he's using it as a motivational tool for him moving forward.

The No. 3 overall pick finished third on the Knicks in scoring at 14.3 points per game and added 5.0 rebounds a night but was left off both the first and second All-Rookie Team at the guard position in favour of Ja Morant, Kendrick Nunn, Terence Davis and Coby White. He received 10 first team votes and 41 second team votes out of 100 ballots from a global panel of basketball writers and broadcasters.

Barrett did struggle a bit shooting the ball, posting a field goal percent of .402 and a three-point percentage of .320 on 3.5 attempts per game. His numbers weren't much better from a net efficiency perspective as he registered a defensive rating -- the amount of points allowed per 100 possessions -- of 114 and had an offensive rating of 95. Still, Barrett finished fourth in points per game and sixth in minutes played (1,704) among rookies.

Regardless of his rookie season recognition, the Mississauga, Ont., said his goal for next season is to help New York reach the playoffs for the first time since 2013.

“I’m trying to make it to the playoffs. I’m trying to win. We shouldn’t expect anything less," he told reporters.

"To me, it’s not as hard-driving as everyone says it is. I’ve always had coaches like that my whole life. That’s what I like. To me, it’s being a good coach," he said.

The Knicks -- who have not played since the NBA suspended its season on March 11 -- are scheduled to play their first game in over nine months on Dec. 11 as they take on the Detroit Pistons to open the preseason.