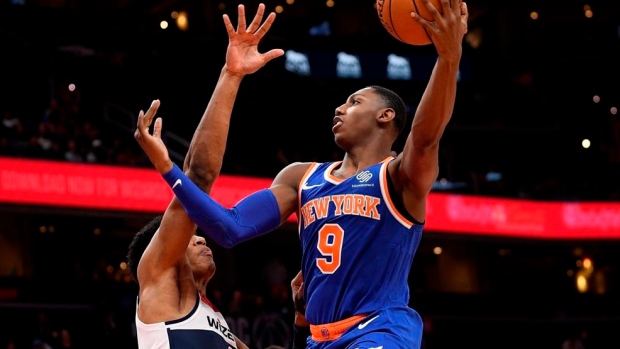 The San Antonio Spurs and New York Knicks took decidedly different tacks to get to the opening of the 2019-20 NBA season, which begins for both on Wednesday night when the teams square off in San Antonio.

The traditionally non-flashy Spurs mostly stood pat in the player department, and the Knicks, coming off a franchise-worst-tying 17-65 campaign, all but remade their roster.

With a core of centre/forward LaMarcus Aldridge, shooting guard DeMar DeRozan and point guard Derrick White, San Antonio went 48-34 last season and pushed the second-seeded Denver Nuggets to seven games before bowing out in the first round of the playoffs.

It was the 22nd consecutive trip to the playoffs for the Spurs, which extended their NBA record.

San Antonio's biggest addition, third-year guard Dejounte Murray, was with the team last year but missed the entire campaign with a knee injury suffered in the preseason. On Monday, the team signed Murray to a contract extension reported to be for four years and $64 million.

San Antonio can send a variety of lineups to the court depending how it wants to match up with its opponents. The roster is loaded with guards and contains a mix of veterans and youthful players, all fully invested into coach Gregg Popovich's defence-first scheme.

"It feels good going into the season with the depth that we have, the bodies that we have and being dynamic and be able to in any combination that we feel fits," DeRozan said. "Everybody is understanding of their role, their plays, and the type of style that we have to play, and is aware and understands what is asked of them."

Popovich was asked last week if he had seen any improvement in the team's defense since the start of training camp.

"Not yet," he replied in his typical fashion. "We still stink."

Don't expect that situation to continue. New York could face the brunt of the Spurs' continuing steps toward improvement.

The Knicks have fallen short of the postseason for the past six years and haven't played meaningful games after March 1 in five of those. In 2018-19, New York's record was the league's worst.

That dismal performance earned the Knicks the third overall pick in the draft, which turned into former Duke star RJ Barrett, who is just 19 years old. New York also signed free agent Julius Randle, and those two players, along with Dennis Smith Jr., could be difference-makers for the Knicks.

Knicks coach David Fizdale said he has a good mix of talented players.

"I don't have a gauge or number, but I do think this team can be a lot better," Fizdale said. "The guys all add a different skill set that we didn't have before. We added more shooting, couple more playmakers, we got some guys that can post. I feel like this team is maybe further ahead than last year's team."