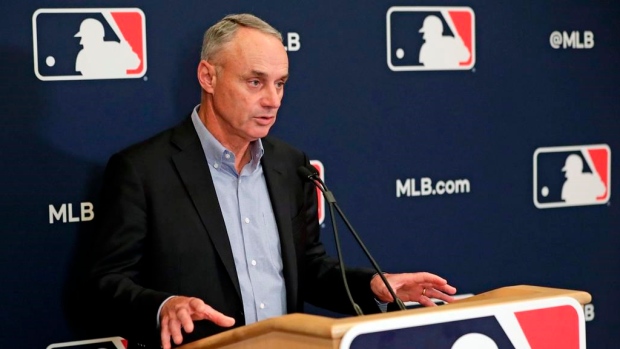 In an interview with Barry M. Bloom of Sportico, Manfred claims baseball's 30 teams have amassed $8.3 billion in debt and will post between $2.8 million and $3 million in combined losses with fans unable to attend games for the vast majority of the 2020 season due to COVID-19.

"We are going to be at historic high levels of debt,” Manfred told Sportico. “And it’s going to be difficult for the industry to weather another year where we don’t have fans in the ballpark and have other limitations on how much we can’t play and how we can play.”

The Athletic's Evan Drellich wrote Monday that while an MLB source confirmed a similar figure, losses are difficult to independently verify because the league does not make its underlying financial numbers publicly available.

"The figures never include the money owners make from ancillary revenues, such as their stake in regional sports networks, for those who have one," Drellich adds.

“The economic losses [this season] have been devastating for the industry,” Manfred told Bloom. “You’re seeing the ramifications of that in terms of decisions clubs are making with respect to [laying off] baseball operations and business employees. I mean, you’ve never seen those type of decisions, at least since I’ve been around."

After months of back and forth between the league and the Major League Baseball Players Association, the two sides were not able to come to a deal on the economics of a shortened 2020 campaign. The league mandated a 60-game regular season that began in late July and added two playoffs spots in each league, apparently hoping an expanded postseason would help with the league's economic situation.

Manfred told Sportico he finds it difficult to envision a scenario for 2021 where things are back to normal and expects many conversations with the MLBPA in the future regarding next season.

The Los Angeles Dodgers currently lead the Tampa Bay Rays 3-2 in the World Series as L.A. can clinch their first World Series title since 1988 with a victory.