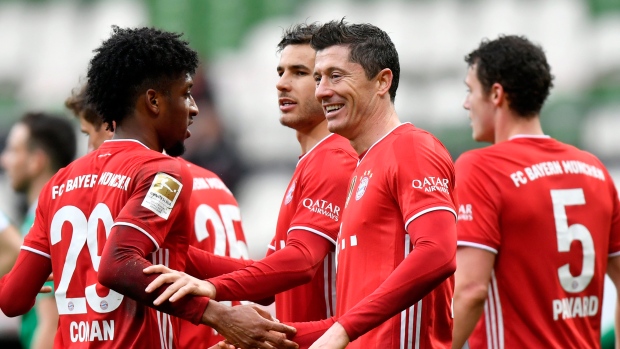 Lewandowski took his season tally to 32 league goals and matched the record of scoring against 16 different teams within a season. He managed the same feat last season. Former Bayern great Gerd Müller and Bremen striker Aílton are the only others to manage it.

Lewandowski has so far only failed to score against Leipzig this season. The teams meet in Leipzig on April 3, when the Poland striker will be aiming to become the first player to score against every opponent in a season.

By scoring his 268th league goal on Saturday, Lewandowski also matched Klaus Fischer’s haul from 1968-88. Only Gerd Müller, who scored 365 goals for Bayern between 1965-79, has more.

Lewandowski is closing in on Müller’s league record of 40 goals from the 1971-72 season.

It wasn’t just Lewandowski in Bremen.

Goretzka opened the scoring in the 23rd when Müller headed on Joshua Kimmich’s corner, and Müller was involved again in the 35th. He did brilliantly to control Kimmich’s cross on his chest and then calmly slot the ball across for Gnabry.

Lewandowski drew good saves from Jiri Pavlenka and hit the crossbar before he finally got his goal in the 67th. A rebound from Bremen defender Ludwig Augustinsson landed at his feet for one of Lewandowski’s easiest goals this season.

Niclas Füllkrug scored Bremen’s consolation on a rebound in the 86th.

Union Berlin captain Christopher Trimmel scored his first Bundesliga goal for the team to come from behind and beat Cologne 2-1, consolidating seventh place.

Union had been simply targeting survival in its second-ever season in the Bundesliga.

“Internally we might have to correct the targets,” Trimmel said. “And then we’ll press the pedal to the last day.”

People working at the stadium were given the option of taking a coronavirus test before the game. Participants had to wait 15 minutes for the result from their nasal swab. They were informed with a message to their mobile phone and the result was checked before admittance via a QR code attached to the person’s wrist.

Union spokesman Christian Arbeit said 165 of 280 people entitled to take a test did so, and all test results were negative.

The 16-year-old Youssoufa Moukoko sealed a 2-0 win for Borussia Dortmund over Hertha Berlin in the late game. He eluded visiting captain Niklas Stark before shooting through goalkeeper Rune Jarstein’s legs in injury time.

Dortmund has concerns about captain Marco Reus, who was injured late in a bad challenge from Vladimir Darida, who apologized immediately before he was sent off.

Julian Brandt made the breakthrough in the 54th when he let fly from distance after combining with Erling Haaland and Reus.

Dortmund climbed to fifth, one point below Frankfurt, which currently occupies the last Champions League spot.

Only goal difference was keeping Hertha above Mainz in the relegation zone. Mainz beat Freiburg 1-0 earlier.

Former Arsenal and Germany defender Shkodran Mustafi scored an own-goal as last-place Schalke moved another step closer to relegation with a 5-0 trouncing at Wolfsburg.