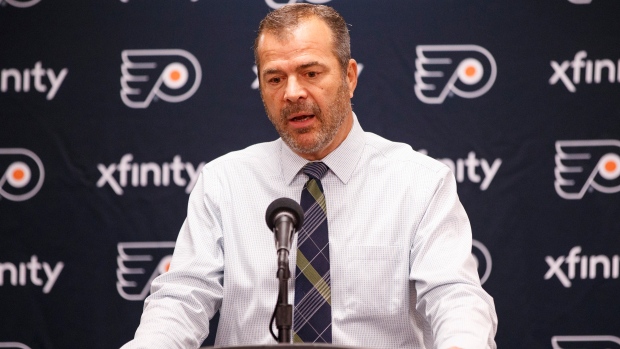 After setting off a firestorm late Saturday night with a series of tweets in which he accused unnamed NHL teams of plying players with opioids without a prescription, Vegas Golden Knights goaltender Robin Lehner issued a clarification to ESPN's Emily Kaplan on Monday about the inclusion of Philadelphia Flyers head coach Alain Vigneault in the string of tweets.

#PhiladelphiaFlyers ? Dinosaur coach treating people robots not human. Fire these dinosaurs. Fire #vigneault first story. I got proof.. try to shake your way out of this one ….

The 30-year-old Lehner told Kaplan that he did not mean to insinuate that Vigneault had been giving his players opioids, but only that his treatment of his players was unacceptable.

Robin Lehner clarifies: he never was accusing Alain Vigneault of distributing pills to players. His claim was about the way the coach treats players, which he believes is unacceptable.

Lehner had a good call with the NHLPA yesterday. We’ll see what comes of the story this week.

Earlier on Monday, Vigneault responded to Lehner's remarks during his media briefing.

"I consider myself experienced," Vigneault said. "A dinosaur? You could say with experience you become a dinosaur, maybe. But I do know I've been coaching a few years and I am tough, I am demanding, but I care about my players. Through the years probably there are some guys who liked me and probably some a little less, but I've done it with the best intention [and] with respect."

Vigneault, 60, heads into his 19th season as an NHL head coach and his third with the Flyers. The Quebec City native has coached in 1,341 career games with the Montreal Canadiens, Vancouver Canucks, New York Rangers and Flyers.

On Sunday, the league announced that it had reached out to Lehner for further clarification on his allegations.

Lehner also told Kaplan that he had spoken with the National Hockey League Players' Association about his remarks.

A native of Gothenburg, Sweden, Lehner is heading into his 12th NHL season and third in Las Vegas.