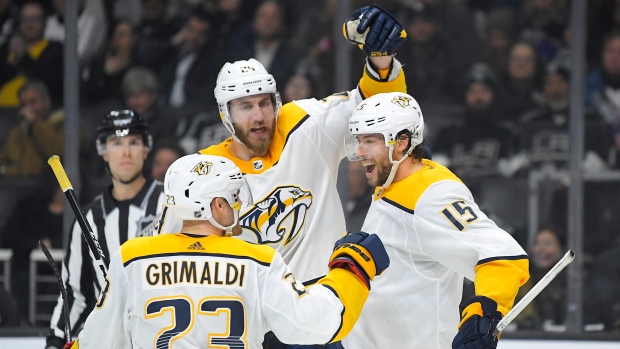 LOS ANGELES — If the Nashville Predators are going to get back into playoff contention, star defenceman Roman Josi will likely lead the way.

Josi had two assists to extend his point streak to a career-high nine games, and Rocco Grimaldi and Craig Smith each had a goal and an assist to help the Predators beat the Los Angeles Kings 4-1 Saturday night to end a three-game losing streak.

“Obviously, we’re not happy with the way we’re playing the last three games, and yeah, it was a big win,” Josi said after tying Shea Weber for the longest point streak in franchise history by a defenceman. “And you saw it, everybody bought in, and that’s what we need.”

Alex Iafallo scored on the power play and Jack Campbell made 34 saves for the Kings, who have lost five of seven.

Josi delivered at both ends of the ice despite playing without usual partner Ryan Ellis, who is on injured reserve because of an upper-body injury caused by an elbow to the head from Dallas forward Corey Perry in the 2020 Winter Classic on Wednesday. Nashville was also down another defenceman in Dante Fabbro, who is day-to-day with an upper-body injury.

Grimaldi made it 1-0 at 10:21 of the first period by scoring off his own rebound, with Josi getting the secondary assist. But it was on the Predators’ second goal that Josi showed off his offensive skills.

Josi spun past Kings forward Matt Luff, raced to the right circle to get three more Los Angeles players looking at him, then threaded a pass through the slot that Johansen buried on a one-timer to make it 2-0 with 44 seconds remaining in the first.

“It was awesome,” Predators coach Peter Laviolette said. “I mean, he’s been doing that all year. And it wasn’t just that play. He was attacking the offensive zone whenever he saw a seam or saw a crack in it, and just pushing the pace offensively with beautiful play all the way from the blue line.”

Josi also set a Predators record for most points through 40 games, with 14 goals and 29 assists just shy of the halfway mark of the season.

While Josi is on pace for his most productive season, he believes the increase in points is the result of playing within himself and not trying to do too much, especially during this streak.

There was no such luck for the Kings, as coach Todd McLellan said they were simply outworked.

“Perhaps this is good for our team — a little piece of humble pie won’t hurt us right now,” McLellan said. “Gives us an indication that we've still got a lot of work to do.”

Predators: At the Anaheim Ducks on Sunday.