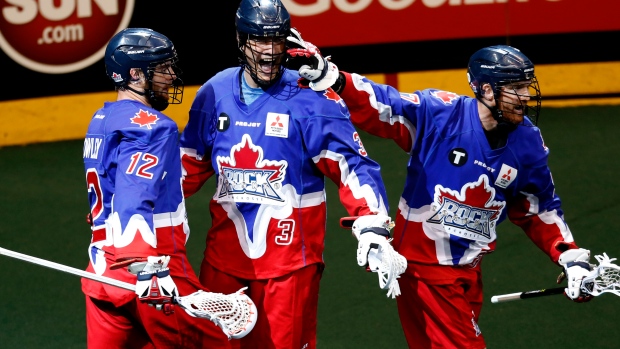 The Toronto Rock dominated the Buffalo Bandits from whistle to whistle in an 18-10 win on Friday night at Air Canada Centre. The Rock were led by a 10-point game from rookie Tom Schreiber and 38 saves from goaltender Nick Rose.

“It was a real good response coming off the performance that we weren’t happy with,” said Rock Head Coach Matt Sawyer. “Top to bottom we deserved that one. It’s not always about your last game, we know we laid an egg, but the true tell of a team is how you answer it, and we answered it well tonight."

Toronto jumped out to a 5-2 lead on their way to taking a commanding halftime lead they would never relinquish.

Brett Hickey and Dan Lintner staked the team to a 2-0 lead before goals from Kevin Brownell and Craig England tied it. The Rock went on a three-goal run with goals from Jesse Gamble, Kasey Beirnes and Tom Schreiber.

Lintner and Schreiber each scored their second goals of the game to begin the second quarter. Stephan Leblanc got one with some nifty fakes to beat, and ultimately chase, Buffalo starter Anthony Cosmo. Mitch Jones got one back for Buffalo completing a two-on-one with Brad Self, but Lintner and Schreiber did it again. Schreiber’s hat-trick goal was jaw dropping; he soared, seemingly in slow motion, through the air and over the crease to tuck the ball past Davide DiRuscio. Dhane Smith picked up the Bandits’ fourth goal of the game to close out the half with the Rock leading 10-4.

In the third, Beirnes and Hickey potted their second goals of the game. Ryan Benesch and Alex Kedoh Hill replied for the Bandits but Mikey MacDonald also scored to increase the Rock lead.

Turner Evans accepted a cross-crease pass from Beirnes and quick-sticked the ball into the Bandits’ net just 1:38 into the fourth. Twenty-eight seconds later, MacDonald potted his second of the game. Buffalo went on a four-goal, trying to claw back into it, but Leblanc scored his second, Hickey completed his hat trick, and Damon Edwards scored a last minute fast-break insurance marker.