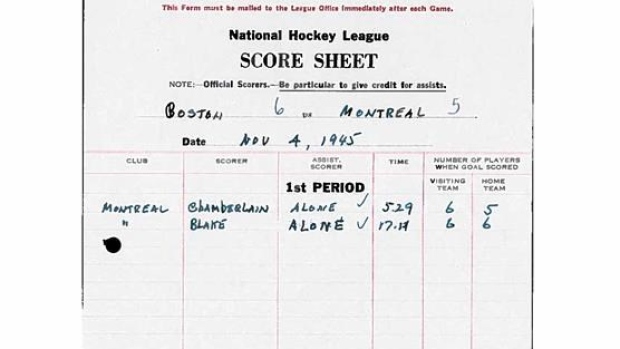 MONTREAL — It's not as if any great injustice was done, but Montreal Canadiens legend Maurice (Rocket) Richard getting an assist added to his prodigious NHL scoring totals.

Six years of poring over scoresheets and summaries of games between 1917 and 1987 by an NHL statistics team has found and fixed more than 6,000 bits of information that were overlooked or misregistered in the league's early eras.

Among the finds was an assist on a Toe Blake goal at 10:15 of the second period of a 6-5 Boston Bruins victory over Montreal on Nov. 4, 1945, during a time when the Punch Line of Richard, Blake and Elmer Lach was terrorizing the league.

The scoresheet that night, in handwriting akin to hen scratching, correctly had Richard with the lone assist. But when it was transcribed into the league's official ledger, it was given to Emile (Butch) Bouchard — an understandable mistake.

The restored assist gives the Rocket 422 in an 18-year career that ended in 1960. His points total climbs to 966. For the 1945-46 season, one year after he made history as the first to score 50 goals in a season, he now has 27 goals and 22 assists. The new totals are already entered in Richard's stats on NHL.com.

It's a good thing it wasn't a goal, because Richard's then-record career total of 544 has become an iconic number. A big deal is often made when an NHL star scores his 544th, such as when Alex Ovechkin did it against the Canadiens in Montreal on Jan. 10.

In the early 1960s, the Rocket owned a bar called the 544/9 Tavern, a reference to his goals total and retired jersey number.

Since 1999, the league awards the Richard Trophy to the season's leading goal-scorer.

Finding little gems of information like the Richard assist was one product of a massive undertaking to update and modernize the league database, which is to be re-launched this week.

Sometimes power-play or shorthanded goals weren't registered as such. Rules changes added to the muddle. In the league's earliest days, minor penalties lasted three minutes instead of two. There were years when up to four assists were awarded on a goal.

"In the old days, they didn't keep descriptions of penalties — now that's in there," said Ercolani.

He said the new website statistics will allow users to find full information from the league's entire 100-year history, and access them in new ways.

"This is only the tip of the iceberg," he said. "There's a lot of other stuff coming.