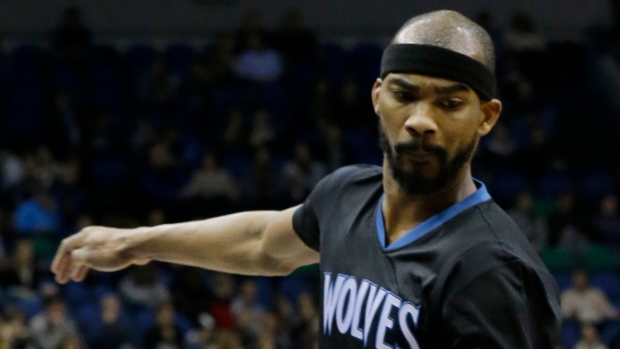 MINNEAPOLIS - The Houston Rockets made a move to bolster their depth on the perimeter on Friday, obtaining veteran swing man Corey Brewer from the Minnesota Timberwolves in a three-team trade that also included the Philadelphia 76ers.

The Rockets sent shooting guard Troy Daniels, cash considerations and a pair of future second-round selections to Minnesota: a protected pick in 2015 originally belonging to Sacramento (acquired by Houston in September) and a protected pick in 2016. The Timberwolves sent centre Ronny Turiaf to the 76ers, who dealt guard Alexey Shved to the Rockets. Houston also sent to Philadelphia its own 2015 second-round draft pick and the rights to centre Serhiy Lishchuk, a Ukraine native currently playing in Spain.

The trade gave the Rockets another proven veteran defender in Brewer to compete in the demanding Western Conference, where they were in fourth place at 19-6 after Thursday's games. Rockets general manager Daryl Morey has been in pursuit of help for weeks, knowing that Golden State, Memphis, San Antonio and the Clippers all could have superior depth to his roster.

Houston lost out to rival Dallas in the bidding for point guard Rajon Rondo on Thursday, so Morey immediately set his sights on Brewer, who scored 51 points in a game against them last year. That scoring explosion was an anomaly, but Brewer is a hard-working veteran who should fit in well with teammates James Harden and Dwight Howard. Brewer is one of the NBA's best at stealing the ball, and his ability to sprint out for easy transition baskets ought to allow him to make an easy transition to Houston.

Rockets coach Kevin McHale knows Brewer well. McHale was the general manager in Minnesota when the Wolves chose him seventh overall in 2007.

Brewer left and won a championship with the Mavericks before blossoming as an energy guy off the bench with the Denver Nuggets.

He returned to Minnesota last year and was serving as a valuable mentor to youngsters Andrew Wiggins, Zach LaVine, Shabazz Muhammad and Anthony Bennett. On a team beset by injuries, Brewer was even filling in at backup point guard for long stretches.

But with Mo Williams back playing after missing time with a back injury and Ricky Rubio possibly returning before January, the Wolves started to entertain offers for Brewer as they forged ahead with a full-on youth movement.

Injuries to Rubio, Nikola Pekovic, Kevin Martin and Williams have short-circuited any hopes the Wolves had of being a surprise team in the first season after trading Kevin Love to Cleveland. They were 5-19 heading into Friday's game at Boston, the worst record in the West, so they flipped a valuable asset in Brewer, who has a player option on his contract next season for more than $5 million for a young shooter in Daniels and some future draft picks.

The move will allow them to get an even longer look at Muhammad, who has been their best player this season but has been stuck in a logjam on the wing partially because of Brewer's presence.

Daniels played less than 7 minutes per game for the Rockets this season, but his ability to shoot the 3-pointer will be a welcome addition to the Wolves, who are among the league's worst 3-point shooting teams.

It also could signal the first of many moves as president and coach Flip Saunders embraces a youth movement he initially hoped to avoid. Saunders added Williams and veteran power forward Thaddeus Young in the off-season in hopes of surrounding a young core of Wiggins, Rubio and LaVine with experienced support.

But Rubio has been out since Nov. 7 with a sprained ankle, Martin is out until well into January with a broken wrist and Pekovic continues to be bothered by soreness in his right foot.