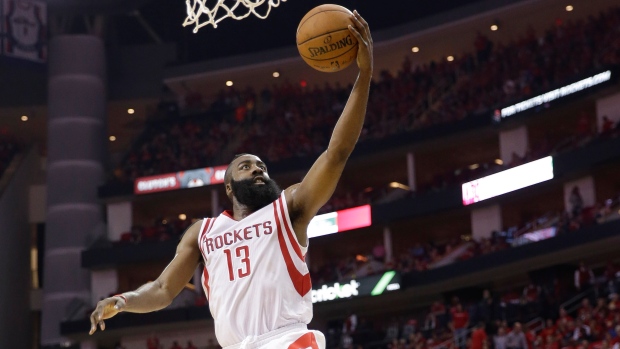 HOUSTON - James Harden loves games like the one Houston had Saturday night.

He had 24 points to lead the team in scoring as he usually does. But six other Rockets also scored in double figures in a 118-108 victory over the Dallas Mavericks in Game 1 of their Western Conference series.

"That's means everybody's touching the basketball, everybody's getting involved and they can't only just stop one person," Harden said. "They put two on the ball, me I make the pocket pass, I made the easy play and had confidence in my teammates to make the next one."

Corey Brewer led the way in the fourth quarter, scoring 13 of his 15 points. Brewer made three 3-pointers in about 3 minutes in the fourth to keep the Mavericks at bay. He added another three points when he made a layup and a free throw to give Houston a 109-95 lead with 3 minutes left.

"You've got to give the other guys credit," Dirk Nowitzki said. "Obviously, we were paying a lot of attention to James, but they made some plays off the pick-and-rolls. It's just too easy."

Houston won the opener in the best-of-seven series after losing both home games last season in a first-round loss to Portland. Game 2 is Tuesday night in Houston.

"It's all about Game 1," Brewer said. "You have to get Game 1, especially when you have homecourt advantage. For us, it was big to get a win. We got a win, and now we've got to get Game 2."

Nowitzki had 24 points for the Mavericks. They are in the playoffs for the 14th time in the last 15 seasons.

Dwight Howard had 11 points, five rebounds and five blocks for Houston. The Rockets also got a big game from Jason Terry, who spent eight seasons with the Mavericks. The 37-year-old, starting with Patrick Beverley out following wrist surgery, finished with 16 points.

"James is a handful he's a tough guy to handle," Houston coach Kevin McHale said. "He demands a lot of attention out there and when he gets off the ball and moves it, it helps our offence."

It's the third time these in-state rivals have met in the post-season and the first time since Dallas won the first-round series in 2005.

Former Rocket Chandler Parsons, who returned after missing the last six regular-season games with a knee injury, had 10 points and six rebounds for Dallas.

Nowitzki got Dallas within seven with a basket with about 9 minutes left, but Brewer made a 3-pointer as the shot clock expired to make it 93-83. Dallas was down by six a couple of minutes later when Brewer struck again, capping a 5-0 run with another 3-pointer to make it 100-89.

The Mavericks scored four quick points before Brewer sunk his third 3-pointer of the quarter to stretch the lead to 103-93.

"Brewer hit a couple of late clock ones where we were doing some good things and starting to make some runs," Dallas coach Rick Carlisle said.

Dallas wrapped up the third quarter with seven points in a row to cut the lead to 84-77 entering the fourth. Ellis made a 3-pointer at the buzzer before falling onto the lap of a fan on the front row to end that run.

Houston scored the first six points of the third quarter before a 3-pointer by Nowitzki. He was fouled on the play by Terry and made the free throw to get Dallas within 65-59.

A 3-pointer by Ellis cut the lead to five points soon after that, but the Rockets responded with an 11-2 run, with two 3-pointers from Terry, to make it 78-64 midway through the third.

The Mavericks trailed by 13 before scoring the first six points of the second quarter to cut the lead to 33-25.

Josh Smith's alley-oop dunk left Houston up by nine before the Mavericks used a 14-3 spurt to take a 42-40 lead with about 4 minutes left in the first half. Tyson Chandler and Nowitzki made four points apiece in that run and Rajon Rondo capped it with a basket as the Mavericks took advantage of three turnovers by Houston. Rondo didn't score in the first quarter before scoring 11 in the second.

The Rockets had regained a two-point lead soon after that, before Rondo scored the first five points of a 7-2 run that gave Dallas a 53-50 lead.

Houston closed out the first half with five straight points to lead 59-55 at halftime.

Mavericks: F Charlie Villanueva played in his first playoff game on Saturday night after appearing 594 regular-season games without reaching the post-season, which was the longest such streak in the NBA. ... Richard Jefferson received a flagrant 1 foul in the second quarter. ... Chandler finished with 18 rebounds and 11 points.

Dallas guard Devin Harris didn't play in the second half because of a toe injury that kept him out of the Mavericks last game. Carlisle said his toe was "bothering him" and that they'd know more about his availability for Game 2 on Sunday.