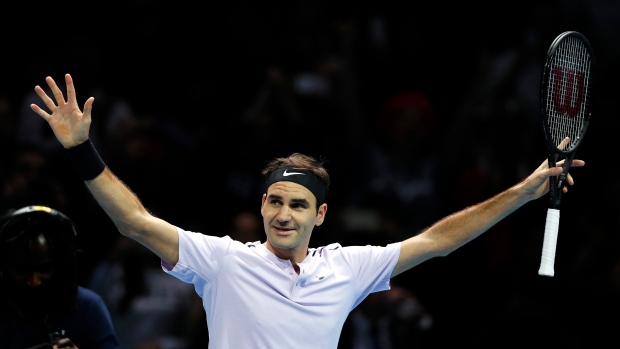 LONDON — One break of serve, and a mini-break, was all Roger Federer needed to win his opening match at the season-ending ATP Finals on Sunday.

The 19-time Grand Slam champion broke Jack Sock at the start of his 6-4, 7-6 (4) victory at the O2 Arena. Both then held serve the rest of the way, with Federer losing only three points on his serve in the second set.

"Sure, I had a tactical plan with my team," Federer said. "But very often in a first match like this, it gets thrown overboard because at the end you're just happy to be serving well. Focus on that first, and then on the return game sort of try your best, try to keep the ball in play, and go from there."

The 36-year-old Federer, who is ranked No. 2 in the world and won the Australian Open and Wimbledon this season, is the oldest player ever to qualify for the season-ending tournament, which started in 1970.

Federer broke Sock, who was making his debut at the tournament, in the very first game, hitting a backhand winner to take the 1-0 lead.

"I missed one first serve in the first game," Sock said. "I had my chances. He put me in some awkward positions on some of those forehands."

That was the only break point for either player in the first set. But Federer had plenty more in the second set - five, to be exact. He just couldn't convert them.

In the tiebreaker, Federer went ahead 3-2 with a mini-break, but Sock got it back. After another to make it 5-4, however, it was nearly over. Federer won the final two points on his serve to go to 1-0 in the round robin.

Sock had his moments, though, including a tweener in the second set when he was leading 40-15. Federer got to it and hit a backhand winner.

"When he hit it, it wasn't very clean. I figured it was going to go out. It landed just inside both lines," said Sock, who still won the game. "But, I don't know. It's Roger, I guess. He can do no wrong. Everything goes in."

Another light-hearted moment came when Sock hit a shot that should have set up an easy winner for Federer. Instead of taking a defensive stance, Sock turned his back to Federer as if to protect himself from a shot to body.

Federer, surprisingly, put his easy chance into the net.

"It was a big distraction, I'll tell you that," Federer joked about Sock's backside, "because it was very big. That's what I should have aimed for."

Federer has won a record six titles at the ATP Finals, including two in Houston, two in Shanghai and two in London. His last one came in 2011.

Sock is one of four players to qualify for the tournament for the first time. Zverev, Grigor Dimitrov and David Goffin also qualified, though Goffin played in the tournament last year as an alternate after Gael Monfils withdrew.

After the Federer match, Rafael Nadal was given his trophy for finishing the year as the No. 1 player in the rankings.

The Spaniard will play his first match at the tournament for the top eight players in the world on Monday against Goffin. In the early match, Dimitrov will face Dominic Thiem