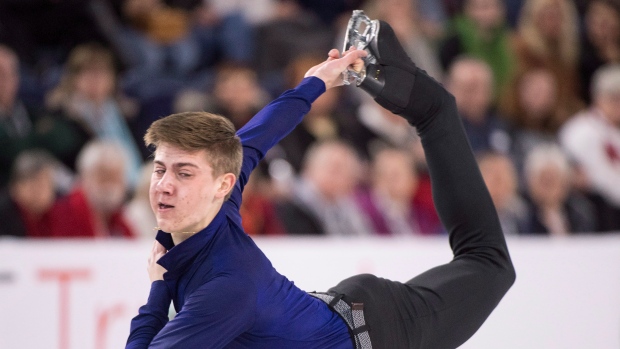 Six weeks after he skated his only competitive free program of a figure skating season wiped out by COVID-19, Roman Sadovsky watched the event play out alone in his basement apartment of his parents' house.

The suspense was agonizing, like throwing up a buzzer-beater with the game on the line, and having to wait six weeks to see if it drops through the hoop.

"I sort of just cooped up down in my basement, my parents watched it upstairs," Sadovsky said. "I felt like I needed to watch it alone. I didn't need all these people watching beside me and hearing their opinions too. So I just kept to myself . . . and watching it was honestly excruciating."

The 21-year-old from Vaughan, Ont., the leader after the short program, landed a pair of quad jumps in his free skate to Snow Patrol's "Chasing Cars" -- a pre-recorded program from early December -- to win the Challenge with 262.01 points.

"Usually when we skate, we have maybe two minutes that we kind of absorb what we did, and then we get a score, and we have a result," said Sadovsky, the reigning Canadian champion. "But with a month-and-half, you have so much time to overthink, and then you start forgetting the details of what you did.

"Because as you skate, it blurs out, you go into autopilot. You don't consolidate any of that memory. It's all gone."

Among sports, the global pandemic has been particularly unkind to figure skating. The world championships last March in Montreal were among the first major international event erased by COVID-19, and it's been a snowball of cancelled events ever since.

Next month's Canadian championships were recently cancelled, leaving the Challenge as the only event this season for Canadians. And it was a makeshift competition, originally slated to be held live in Edmonton.

Instead, it was virtual and pre-recorded. Skaters performed their programs for a video crew in their home rinks over the last few weeks, and those programs were broadcast — and judged — over the past two weekends.

"It's so bizarre. Everything was bizarre this year," Sadovsky said.

Sadovsky said the cancellation of the national championships in Vancouver wasn't surprising as Canada struggles with COVID-19's second wave. The news was still heartbreaking.

"I watched this performance, and there's a lot left to be desired, and a lot that I wish I would have done. So that's the biggest part for me," Sadovsky said. "It's very disappointing, especially on a national stage for that program, that I couldn't have that one more opportunity to skate this year."

Sadovsky was happy his mom Olha and dad Mykola got to see him skate at least once this season, albeit on TV.

"Usually they come and watch me practise occasionally because I live pretty close to my training facility, but they actually haven't seen me skate even in person since the lockdown," Sadovsky said. "It's just impossible for them. So for them, (Saturday) was a pretty special moment."

Sadovsky has almost 20,000 followers of his YouTube channel "Romsky," and nearly a million views. He produces pieces in his mini basement studio. Sadovsky was philosophical about the crazy year that was 2020 and the uncertain future in his short film called "The Next Episode."

"At this point we're living in a movie, with a director that has a very interesting vision with a series of plot twists that you would never expect, nor did you ever ask for. And it's been getting a little bit messy," Sadovsky says in the three-minute piece.

"Lately it just seems we make these big strides forward only to get pushed back again, and it feels irritatingly stagnant. . . Regardless of the movie that we live in, what kind of a movie would it be without a solution? In the end, we are the protagonists that need to find that solution.

"The biggest question for me is how long with this episode be? Perhaps scariest part of any movie is the unknown of where it's going. The path is completely unclear."

The Canadian championships in this pre-Olympic season would have also determined the team for the world championships in March in Stockholm. The worlds are still scheduled to go ahead, but plenty of questions have been raised about them as well.

Keegan Messing is the only Canadian to have competed internationally this season, finishing third in men's singles at Skate America. He didn't compete in the Challenge.

On Sunday, reigning Canadian champions Piper Gilles and Paul Poirier had the best score in the senior dance event at 223.33. Laurence Fournier Beaudry and Nikolaj Sorensen finished second with 206.91 while Marjorie Lajoie and Zachary Lagha finished third with 200.42.

This report by The Canadian Press was first published Jan. 17, 2021.