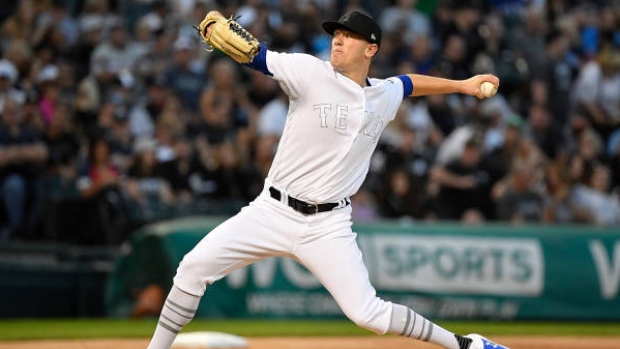 The rookie accepted the challenge and flourished.

Allard pitched into the seventh inning, and Texas used homers by Willie Calhoun and Danny Santana to beat the Chicago White Sox 4-0 on Saturday night.

Allard (2-0) allowed six hits, struck out eight and walked none in his fourth start since he was acquired in a trade with Atlanta last month.

Calhoun and Nick Solak had two hits apiece for the Rangers, who had dropped seven of 10.

Jose Abreu had two of Chicago's eight hits, giving him 1,001 for his career. The White Sox had won three in a row.

Calhoun hit a two-run drive off Ivan Nova (9-10) in the sixth, giving the Rangers a 2-0 lead. It was his fourth homer in his last six games and No. 15 on the season, extending his career high.

Elvis Andrus was aboard after he reached on shortstop Tim Anderson's throwing error, stole second and advanced on catcher James McCann's throwing error. The White Sox finished with three errors.

Santana added another two-run shot against Jimmy Cordero in the seventh.

Rafael Montero and Jose Leclerc combined to strike out six and limit the White Sox to two hits in the final 2 2/3 innings.

In his previous start, Allard allowed a career-high seven runs in five innings against the Angels.

He found more success with his cutter Saturday.

White Sox centre fielder Adam Engel made a diving catch on Scott Heineman's liner in the fifth to preserve a scoreless game. Nova clapped in response.

Heineman caught Anderson's drive to the centre field wall to end the Chicago fifth with a runner on second.

Abreu called reaching 1,000 hits "a really big accomplishment for me, my career, for my family and for this organization."

Rangers: RHP Jesse Chavez (right elbow impingement) will possibly have surgery to remove a bone spur. "He's going to see doctor when we get back home and I think the possibility of getting that spur cleaned out is on the table," general manager Jon Daniels said. "If that were to happen, he would not come back this year. He should be 100 per cent for next year." Chavez has been on the IL since Aug. 13. ... OF Hunter Pence (lower back tightness) was out of the lineup and not expected to play Sunday. He said the injury occurred Friday in the batting cage. ... OF Joey Gallo (right wrist surgery) will have to play through pain if he returns this season, manager Chris Woodward said. "It's a tolerance thing. He can't hurt it anymore," Woodward said. Gallo has been on the IL since July 24. ... OF Nomar Mazara (left oblique strain) is taking swings as he nears a return from the IL.

White Sox: OF Eloy Jimenez (right hip flexor soreness) returned as the designated hitter after he missed two games. The team is easing him back onto the field.