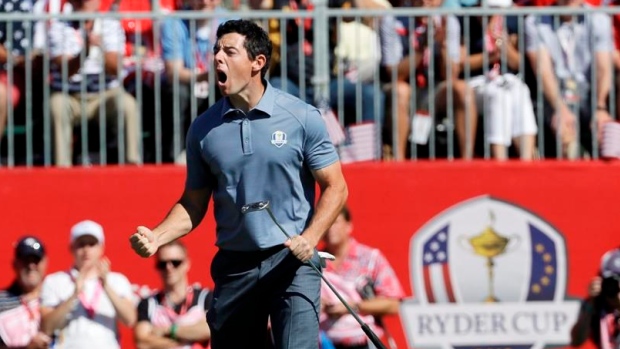 If Rory McIlroy was making decisions, the Ryder Cup would not go ahead this year.

The world’s top-ranked golfer told the BBC that he doesn’t understand how it can go ahead with all the regulations in place from the COVID-19 pandemic.

"My personal hunch is that I don't see how it is going to happen, so I do not think that it will happen," McIlroy said in an interview with the BBC on Tuesday.

"I think the majority of players would like to see it pushed back until 2021 so that they can play in front of crowds and have the atmosphere that makes the Ryder Cup so special.”

The Ryder Cup is set for Sept. 25-27 at Whistling Straits in Kohler, Wis. No event in golf thrives on fan atmosphere as much as the biennial U.S.-versus-Europe showdown. The cheering, singing, booing and taunting have turned the Ryder Cup into a raucous event – sometimes too much of one, with some fans going a bit too far.

Still, the fans are as much a part of the us-versus-them event as the golfers. The costumes, the songs and even the trash talking is so different from most (but not all) weeks on the regular professional tours.

One of the big reasons to hold the event in 2020 is undoubtedly revenue. While there won’t be any ticket sales, television and sponsorship money would still be important to the partners in the event, the PGA of America and the European Tour.

The latter organization, which has always counted on a big take from the Ryder Cup, has given indications that the pandemic pause has hit its bottom line. In a letter to players last month, commissioner Keith Pelley told them to expect less extras at tournaments and lower purses when play resumes.

There is also the small problem that a team event is already on the schedule for next year. The Presidents Cup is slated for Sept. 30-Oct. 3 at Quail Hollow Golf Club in Charlotte, N.C.

In a perfect world, it would just gracefully slide aside and wait another year. There is precedent for such a move. After the terrorist attacks on the World Trade Centre in 2001, the Ryder Cup set for that September was moved to 2002 with the Presidents Cup sliding ahead one year to 2003.

Perhaps both events could be held in the same year, with one early on the calendar and the other late. Or maybe the U.S. could field two teams.

After the next Presidents Cup it’s expected the one following will be held in Canada, possibly at Royal Montreal Golf Club.